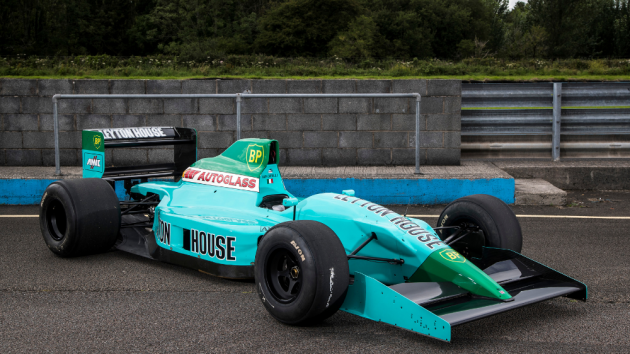 Formula One has extended its licensing agreement with The Memento Group (TMG), the UK-based sports licensing, retail and memorabilia business, until the end of the 2025 season.

The extension sees TMG retain its licence to sell authentic, certified and licensed Formula One memorabilia from current teams, with the contract now including the right to sell ex-Formula One race cars, as well as show cars.

To mark the extension, TMG has launched a special auction featuring, for the first time, a fully operational and ready-to-race Formula One car – the 1990 Leyton House CG901. The car competed in the 1990 season and is expected to fetch in excess of £795,000.

F1 Race Cars, a dedicated section on the F1 Authentics online platform, has been revamped, becoming the dedicated marketplace for all former Formula One race car and show car transactions. A diverse collection is available, from heritage show cars to restored former race cars and replicas of current cars.

TMG has been licensed to operate the F1 Authentics website since 2019 and the four-season extension will see authentic Formula One memorabilia, from the past and the present, made available to fans via the ecommerce platform.

“Since 2019 we have entrusted The Memento Group to help us create and operate a safe and secure online platform for Formula 1 fans to browse, discover and purchase authentic, certified, F1 memorabilia,” said Brandon Snow, managing director of commercial at Formula One.

“Over the past three years our partnership has gone from strength to strength. With F1 Authentics, we have delivered the ultimate motorsport memorabilia destination for all fans of our sport, and the exciting inclusion of former race and show cars expands on the already impressive offering. We look forward to continuing this journey and offering our fans more opportunities to own their own unique piece of Formula One history.”

Barry Gough, founder and chief executive of The Memento Group, added: “We are delighted to extend our partnership with Formula One for another four exciting seasons and what better way to mark this than offering, for the very first time on F1 Authentics a fully operational, ready to race, Formula One race car.

“We have worked tirelessly with our partners at Formula One to create the ultimate destination for fans of the sport and this contract is recognition for what we have achieved to date and this auction demonstrates how we can enhance further our support of the world’s greatest motorsport in the future. We look forward to taking this to the next level with the continued support of Formula One, the teams and, of course, fans all around the world.”