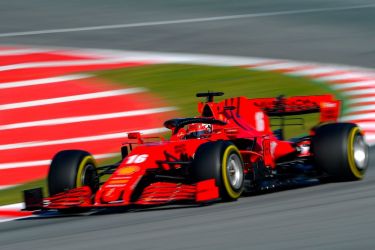 Formula One's owner Liberty Media has handed the global motorsport series a US$1.4 billion lifeline after the company transferred a 33 per cent stake in event promoter Live Nation to satellite radio broadcaster SiriusXM.

Formula One is yet to begin its 2020 season, having been set to start in March, with the nine opening races postponed or cancelled due to the coronavirus pandemic.

It has left teams in limbo and facing an uncertain financial future, with their revenue largely coming from sponsorship and prize money, both dependent on Grands Prix taking place. Franz Tost, boss of AlphaTauri, illustrated the plight by saying recently that the Red Bull sister team were losing “US$1.5 million to US$2 million” per cancelled race.

It is hoped that Liberty’s transaction should provide security for Formula One and its teams, with the US firm saying funds will be used in the event of a continued season delay.

Liberty added that the money also ‘improves discussions with lenders regarding F1 bank covenants which will need amendments'. It comes after a Daily Telegraph report warned that the sport was at risk of breaching its US$2.9 billion loan due to a likely downturn in profit during the Covid-19 enforced shutdown.

As well as now having enough cash to meet its loan obligations, Formula One can use the money to pay prize money to teams and compensate organisers for the loss of ticket sales if events have to be held behind closed doors.

According to Liberty, it also ‘eliminates US$1.3 billion of parent level debt’ attributed to the Formula One Group, the series’ parent company, and leaves it with enough cash 'for opportunistic investments and acquisitions'.

Liberty’s chief executive, Greg Maffei, has already told investors that the US firm has “advanced prize money to certain teams already”. He added: “There are cases where we may do more of that. There are other things that we might do to bridge teams that might need help”.

However, he warned that this does not mean Liberty has “an open chequebook”, and that the company wants to “make sure that teams are solvent because they are part of what we need to race successfully in 2020, 2021, and beyond”.

Plans to get the Formula One season finally underway have included opening the campaign with the Austrian Grand Prix, scheduled for 3rd to 5th July, followed by two races at Silverstone in the UK, all behind closed doors. Though nothing is confirmed, Maffei says Liberty has “scenarios for zero races, anywhere from 15 to 18 races, races that begin with no fans present and only the teams”.

In response to the cash injection, Formula One’s shares, as listed on Nasdaq, were up 9.14 per cent at the time of writing.

Staying in Formula One, McLaren Racing’s chief executive, Zak Brown has accused Ferrari of “living in denial” about the threat facing the sport from coronavirus. The Italian team’s principal, Mattia Binotto, had told the Guardian earlier this week that now was “not the time to react in a hurry” regarding decisions over the series’ future.

In a bid to cut costs, teams had agreed a US$145 million cap per team, effective from the 2021 season. McLaren, and others, are pushing for a further drop to US$100 million, which Ferrari oppose.

“I’m almost at a loss what you say to that,” Brown told reporters. “I think we all recognise that in modern times we are going through the biggest crisis the world has seen.

“You have countries shut down, industries shut down. To not be in a hurry to address what’s going on, I think is a critical mistake.

“It’s living in denial and I think you would find pretty much every president or prime minister or CEO around the world was operating in a hurry to tackle this issue head-on. To take our time I think is a very poor leadership strategy.”