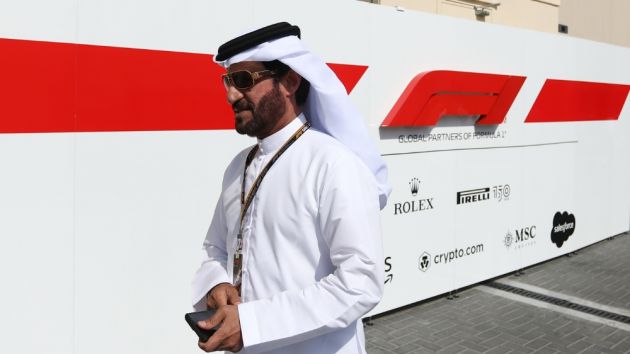 Formula One and Liberty Media have sent a letter to the International Automobile Federation (FIA) accusing the governing body of 'unacceptable' remarks around the value of the global motorsport series.

It recently emerged that Formula One had been subject to exploratory conversations with Saudi Arabia's Public Investment Fund (PIF) with a view to a potential sale last year, but Liberty Media was not interested in selling.

The PIF valued Formula One at more than US$20 billion, around US$5 billion more than a recent estimated market value by Bloomberg.

In response to this becoming public, FIA president Mohammed Ben Sulayem tweeted about the 'inflated price tag' reportedly being placed on Formula One.

As the custodians of motorsport, the FIA, as a non-profit organisation, is cautious about alleged inflated price tags of $20bn being put on F1. (1/3)

This statement from Ben Sulayem 'oversteps the the bounds of both the FIA's remit and its contractual right', according to the letter sent by Formula One and Liberty Media.

The letter, which was seen by the BBC, is co-authored by Formula One's chief legal officer Sacha Woodward Hill and Renee Wilm, who performs the same role at Liberty Media, and is addressed to the FIA executive team and its World Motorsport Council.

Woodward Hill and Wilm pointed out that Formula One has 'the exclusive right to exploit the commercial rights in the FIA F1 World Championship', thanks to the 100-year contract Formula One signed at the turn of the century for said rights.

It added: 'The FIA has given unequivocal undertakings that it will not do anything to prejudice the ownership, management and/or exploitation of those rights.'

Also, the remarks 'made from the FIA president's official social media account, interfere with our rights in an unacceptable manner'.

Woodward Hill and Wilm continued: 'The circumstances in which the FIA would have any role in a change of control of the F1 group are very limited.

'Any suggestion or implication to the contrary, or that any potential purchaser of the F1 business is required to consult with the FIA, is wrong.

The letter added that any 'commenting on the value of a listed entity, especially claiming or implying possession of inside knowledge while doing so, risks causing substantial damage to the shareholders and investors of that entity, not to mention potential exposure to serious regulatory consequences.

'To the degree that these comments damage the value of Liberty Media Corporation, the FIA may be liable as a result.'

It concluded that both parties 'hope and trust that it will not be necessary to address this issue again'.

This represents a substantial escalation to tensions that have simmered between the FIA and Formula One for some time, and the threat of legal action suggests a potentially serious turn.

Why Ben Sulayem felt the need to weigh in on commercial matters is unknown, as this is an area the FIA has no jurisdiction over since Bernie Ecclestone wrestled the commercial rights away from the organisation at the European Commission.

This will only add to increasing concerns that the FIA is mishandling the way the series is being run, which are at risk of boiling over if the upcoming season throws up further controversial decisions.

At the moment, the threat of legal action is just that: a threat. What happens next will come down to whether Ben Sulayem can avoid rocking the boat long enough for the recent structural changes at the FIA to have an effect.