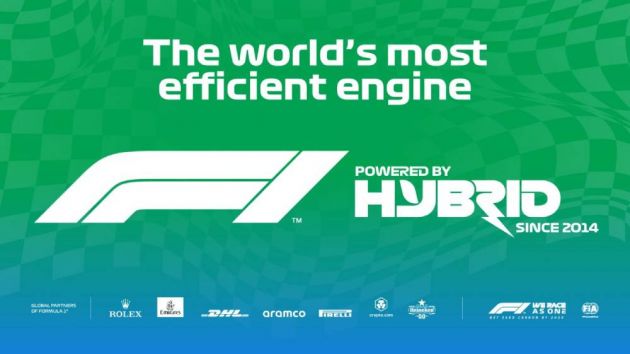 Formula One has revealed new branding aiming to highlight the series' use of hybrid power, which will be introduced from the upcoming Sao Paulo Grand Prix onwards.

Since the 2014 season, Formula One has been racing with V6 turbo hybrid power units to reduce emissions and create the fastest cars the series has ever seen.

In the wake of the United Nation's Cop26 climate conference, Formula One is aiming to push its use of hybrid power to fans by introducing a new set of graphics and branding.

This will be visible across Formula One's broadcast inventory as well as in the paddock, hospitality suites and throughout the pitlane.

This announcement aligns with Formula One's plans to achieve net zero emissions by 2030 and make all of its Grands Prix sustainable through carbon offsetting by 2025.

A recent survey commissioned by the Motorsport Network in partnership with Formula One and Nielsen Sports discovered that 55 per cent of the series' fans believe that Formula One should be a world leader in the development of sustainable fuels.

A statement from Formula One read: ‘The current Formula One hybrid power unit is the most efficient in the world, delivering more power using less fuel, and therefore CO2, than any other car. The technology that already exists in Formula One alongside a sustainable fuel model has the potential to be a game-changing moment.

‘Formula One can continue to be a leader for the auto industry and work with the energy and automotive sector to deliver the world’s first net-zero-carbon hybrid internal combustion engine that hugely reduces carbon emissions around the world.

‘Look out for the new logo during the 2021 Sao Paulo Grand Prix and sprint and beyond.’