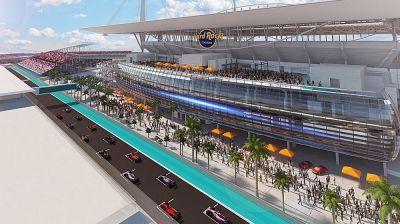 Formula One has confirmed an agreement to stage the Miami Grand Prix at Hard Rock Stadium in May 2021, pending approval from Miami-Dade County.

If approved, the race will take place around the stadium, with a half-mile stretch of the track also including Northwest 199th Street which will be temporarily closed for regular traffic as it is a public road.

Formula One had initially set his sights on a downtown-track location, only to scrap the proposal in favour of Hard Rock Stadium, home to the National Football League’s (NFL) Miami Dolphins, after local opposition. Concerns remain among residents over noise, traffic and pollution, though organisers insist this new location would reduce disruption compared to a downtown race.

According to the Miami Herald, Dolphins and stadium owner Stephen Ross will cover all race costs, including an expected US$40 million custom track.

It takes Formula One a step closer to holding a second US race, a long-held ambition for the global motor racing series’ owners, Liberty Media. The sport had hoped to stage the inaugural Miami Grand Prix this October, having been given the green light for a race in the city in May 2018. Since 2012, the sole stop for Formula One in the US has been the Circuit of the Americas in Austin, Texas.

In a joint statement, Formula One’s commercial managing director, Sean Bratches, and Miami Dolphins chief executive, Tom Garfinkel, said: ‘We are thrilled to announce that Formula One and Hard Rock Stadium have reached an agreement in principle to host the first-ever Formula One Miami Grand Prix at Hard Rock Stadium.

‘With an estimated annual impact of more than US$400 million and 35,000 room nights, the Formula One Miami Grand Prix will be an economic juggernaut for South Florida each and every year.’