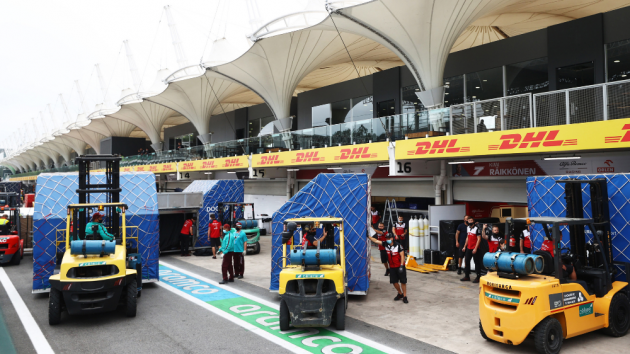 Formula One is planning to group races together based on geographical location from next season, according to Autosport.

Currently, only certain races are bunched together, such as this year’s opening two Grands Prix in Bahrain and Saudi Arabia, leading to considerable travel for teams. Notably, Azerbaijan and Canada are going to be visited on back-to-back weekends in June, while the 2022 campaign ends with races in Brazil and Abu Dhabi.

Chief executive Stefano Domenicali reportedly told team principals that move is designed to to make the schedule more efficient and help to reduce Formula One’s carbon footprint, as well as cutting expenditure given the rise in freight costs.

According to Autosport, one idea is to group the race in Baku, Azerbaijan with the Chinese and Japanese Grands Prix towards the end of the 2023 season.

This could also see the Middle Eastern races paired together, with Bahrain and Saudi Arabia remaining as the season openers, and Qatar slotting in alongside the usual finale in Abu Dhabi.

With the Las Vegas Grand Prix set for November, the proposal will likely be very close to the races in Austin and Mexico City.

Miami has its place on the calendar too early in the season to join the other races in the US and Mexico, so it could instead go alongside the Canadian Grand Prix. This will mean one, or both, will have to move from their 2022 date by at least a month as the Monaco Grand Prix is traditionally held at the end of May.

Meanwhile, Formula One is set for a return to Africa for the first time since 1993, with the long-rumoured race at Kyalami Grand Prix Circuit in South Africa close to being confirmed.

The addition is unlikely to affect the series’ planned calendar changes for next season but, once the race is announced, Formula One will face a logistical challenge on when to stage it.

Speaking to The New York Times, Domenicali said: “We have two options for a new race, and the most likely to hopefully happen soon is South Africa.

“It’s part of our agenda, and there is a commitment to see if this could be on the calendar as soon as possible.”

Liberty Media president and chief executive Greg Maffei added: “Johannesburg is definitely on our list. You’d love to have one in Cape Town, but I’m not sure that’s doable, so Johannesburg is the more likely.”