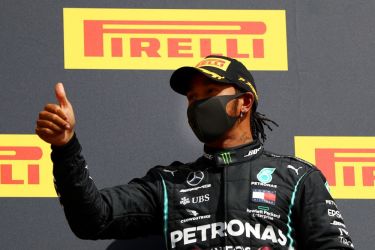 The domestic live broadcast of Formula One’s recent British Grand Prix attracted more than 3.5 million viewers, making it the series’ most-watched race of the 2020 season, according to data provided by Nielsen Sports.

Overall, the combined viewership on pay-TV broadcaster Sky Sports and commercial network Channel 4 for the 2nd August race was up by 24 per cent on the roughly 2.8 million audience for the 2019 British Grand Prix.

Last year’s edition did have to contend with being scheduled on the same day as a Cricket World final that featured England – co-broadcast by Sky Sports and Channel 4 – as well as Wimbledon men’s singles final.

That, however, represented a dip in comparison with the 2020 season’s qualifying sessions to date, owed primarily to a timetable clash with public-service broadcaster the BBC’s coverage from the FA Cup final at Wembley Stadium.

According to Nielsen, Formula One’s UK viewership for live racing and highlights surpassed 13.63 million during the 2020 championship’s first three races, including the season-opener in Hungary and back-to-back weekends in Austria.

Andy Milnes, Nielsen Sports’ head of client services, said: “The British Grand Prix attracted unbelievable numbers. For 3,525,800 to tune in for the live race suggests that appetite in the UK is ramping up once again.

“There are numerous contributing catalysts, the obvious one being Lewis Hamilton’s ongoing dominance in the Mercedes, and UK fans will be keenly following his mission to make history this season by equalling Michael Schumacher’s record of seven world championship titles.

“Equally, the grid is now littered with young, engaging drivers who are opening up the sport to a brand new audience. Nielsen Sports’ data has shown the likes of Lando Norris, George Russell and Alex Albon growing incredible fan bases through social platforms such as Twitch, despite being yet to achieve tangible results on track.”

Acting as the first of back-to-back Formula One races held at Silverstone during the past fortnight, this season’s British Grand Prix saw Hamilton claim his seventh title on home soil – and in dramatic style.

Having led from pole position, the Briton was forced to cross the finish line on three tyres following a puncture, and did enough to hold off Red Bull’s Max Verstappen in second place.