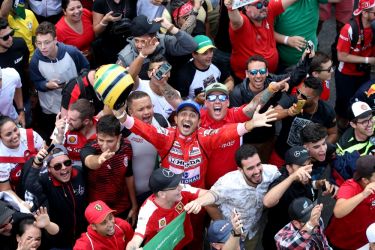 Brazilian media company Bandeirantes is taking over from Globo as the domestic broadcaster of Formula One for the next two seasons.

The broadcaster, more commonly known as Band, says it will show races on the Rede Bandeirantes channel and qualifying on BandSports.

The deal marks the return of the global motorsport series on the network after 41 years. Band’s contract also includes the Formula Two and Formula Three series.

Previous broadcast partner Globo had walked away from Formula One after failing to agree new terms with the series’ owner Liberty Media. Formula One then announced a five-year deal with Rio Motorsports, but was forced to restart media rights negotiations in Brazil after the investment firm abruptly cancelled the contract after just two months.

The Máquina do Esporte news outlet reports that a lack of financial guarantees from Rio Motorsports was also a contributing factor to the deal falling through.

While Band’s audience is significantly smaller than Globo’s, the two-year agreement will allow Formula One to push out its F1TV Pro streaming service – something that was not possible under the series’ previous rights contract.

“Brazil represents one of the five largest markets in the world in terms of Formula One audience and revenue,” said João Saad, the Bandeirantes Network president, who added that it was “a source of great pride” to have the rights back after more than four decades.

In other Formula One news, teams will hold a vote on 11th February to determine whether sprint races should be introduced to Grand Prix weekends.

The series’ bosses have put forward the idea of a shorter race on Saturday, which would replace qualifying, and determine the grid for Sunday’s Grand Prix.

The new format could be trialled at this season’s Canadian, Italian and Brazilian Grands Prix. Eight of the ten teams will need to vote in favour of the idea on Thursday to turn the concept into reality.

Formula One chiefs are keen to shake up the format of a Grand Prix weekend which currently sees two practice sessions on Friday, followed by a third on Saturday ahead of qualifying.

The second practice session on Friday would be replaced by qualifying to make up the grid for Saturday’s proposed shortened race.

It is expected that the top eight drivers in the sprint race would be awarded points which will count towards the championship.

Meanwhile, Formula One bosses have rubber-stamped an arrangement for Portugal to host the third round of the season on 2nd May.

There had been doubts over the Grand Prix, with Formula One exploring the possibility of starting the season by staging consecutive races in Bahrain.

But teams will be told at the 11th February meeting that the sport will return to Portimão for a second straight season after the venue made its debut on the calendar last year.