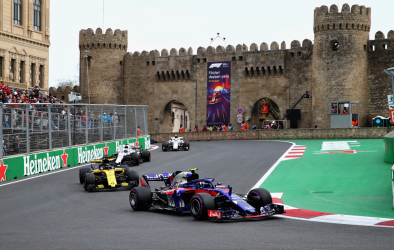 Formula One has announced a three-year extension with the Baku City Circuit ensuring that the Azerbaijan Grand Prix remains on its calendar until 2023.

The current agreement was up for renewal in 2020 but the new deal secures the long-term future of the event, which has seen the global motorsport series race on the streets of Baku since 2016.

The renewal is the first to be finalised by Formula One in 2019 and the sixth to be signed since Liberty Media took charge of the series in 2017, following on from extensions for the Belgian, Chinese, German, Japanese and Singapore races.

The announcement comes just one week after a group of 16 Grand Prix promoters issued a statement criticising Formula One’s direction under Liberty. The contracts for five major races - Britain, Italy, Spain, Germany and Mexico - are up for renewal at the end of the upcoming 2019 season.

“In just a short space of time, this race has become one of the most popular of the season, always producing closely fought and spectacular racing,” said Formula One chief executive Chase Carey. “The Republic of Azerbaijan provides a really excellent welcome to everyone in Formula One and the beautiful city of Baku is an amazing backdrop for the greatest motor racing show in the world.”

This year’s Azerbaijan Grand Prix takes place on 28th April and will be the fourth round of Formula One’s 21-race season.