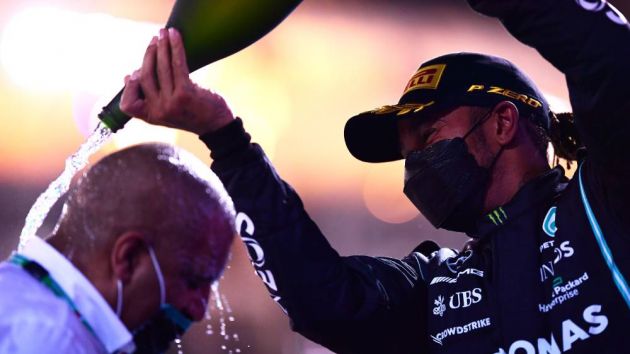 Formula One and Amazon Web Services (AWS) are set to release six new data points throughout the 2021 season to provide fans with in-depth information during race broadcasts.

The first of the metrics to be released in 2021 will be unveiled during this weekend's Grand Prix in Imola, Italy, known as 'braking performance'. The AWS-powered onscreen graphic will reveal the drrivers’ speed, braking power and G-forces during cornering.

An example of the braking performance infographic set to be released at the Imola-based race this weekend.

Later in the season in Canada the 'car exploitation' data point will be rolled out. According to AWS, it will offer an insight into how drivers ‘are pushing their cars to performance limits in areas like tyre traction, braking, acceleration, and manoeuvring during key points in a race’.

Next, 'energy usage' metric will be unveiled during the British Grand Prix, outlining how the cars' power units utilise energy during the race.

For the second Italy-based race at Monza, AWS will start providing 'start analysis' live data to demonstrate which driver got off the line best, which drivers did not do so well and why.

'Pitlane performance' will analyse pit stops during the races, measuring how efficient teams are. This will be launched during the Japanese Grand Prix weekend.

Finally, 'undercut threat' will be added to the pit stop strategy battle data point that was implemented during the 2020 season. This analyses average pit stop loss time, gaps between cars and identifies which drivers are at risk.

"F1 Insights Powered by AWS give fans an insider’s view of how car, driver, and team function together so that they can better appreciate the action on the track," said Rob Smedley, chief engineer at Formula One.

"With this new set of racing statistics for 2021, we are going deeper than ever before. New Insights like ‘braking performance’ and ‘undercut threat’ peel back additional layers of race strategies and performance and use advanced visualisations to make the sport of racing even more understandable and exciting.

"Race car technology improves all the time, and thanks to AWS, our fans can appreciate how that technology impacts race outcomes."

Elsewhere in Formula One, the Miami Grand Prix has moved a step closer to reality as an important resolution was passed by city officials.

The series has been seeking a second US-based Grand Prix to add to its roster for several years and has recently focused on the Florida city.

The resolution means that the next step is finalising a deal between city officials and Formula One. A provisional date of May 2022 for the race has been touted.