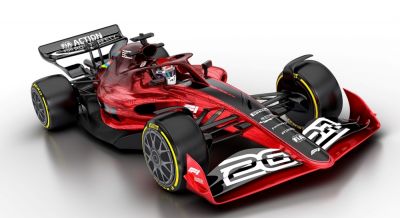 Formula One has released details of its new set of regulations from 2021 onwards as the series’ management seeks to bring about more exciting racing, greater competitive balance and improved financial sustainability in the sport.

Among the sweeping changes is the introduction of the first-ever cost cap of US$175 million per team per season - a move designed to ensure team success is no longer based on how much money they are willing to spend.

Another significant change set out in the new regulations concerns the race calendar and the structure of Grands Prix weekends, which will be condensed to allow for an expanded schedule of up to 25 races each season.

The planned reforms - which were unanimously approved by the FIA, world motorsport’s governing body, and have been ratified by the World Motor Sport Council, Formula One’s legislative authority - will also see a host of changes to the design of F1 cars.

Announcing the changes, which were revealed ahead of this weekend’s US Grand Prix in Austin, Formula One said the new regulations represent the ‘most wide-reaching evolution of Formula One’s regulations ever witnessed in the sport’s history’, and are the result of ‘more than two years of work involving the most detailed analysis of the sport’s on- and off-track operations’.

It added that they ‘are targeted at promoting closer racing and more balanced competition, as well as bringing economic and sporting sustainability’ to Formula One.

“We made many changes during the process as we received input by the teams and other stakeholders and we firmly believe we achieved the goals we had set out to deliver,” said Chase Carey, Formula One’s chairman and chief executive, who described the new rules as “a watershed moment” for the sport.

“These regulations are an important and major step, however, this is an ongoing process and we will continue to improve these regulations and take further steps to enable our sport to grow and achieve its full potential.”

The US$175 million spending cap, which covers the calendar year, relates only to car performance, and excludes other expenditures such as marketing costs, driver salaries, and pay for each team’s three top personnel.

All corporate income tax and other non-F1 activities, property costs, employee bonuses, championship fees and superlicences are also exempt, as are flight and hotel costs for race weeks and testing.

The cost of purchasing a customer engine supply deal, which has been capped at €15 million per season, is also excluded from the cap, which will be regulated by a newly created Cost Cap Administration and auditors at Deloitte.

Any breaches of the spending rules will be punishable by financial and sporting penalties that will range in severity. Financial penalties will be determined on a case-by-case basis, while sporting penalties could constitute anything from a reprimand to points deductions and exclusion from the World Championship.

The spending cap is based on a schedule of 21 races - one fewer than are planned for 2020. Should the number of races increase, teams will be permitted to spend an extra US$1million for every additional race, with the figure reduced in the same way if the calendar is shorter than 21 races.

While F1 cars will continue to run on the existing 1.6-litre V6 turbo hybrid engines, new front and rear wings, increased underbody aerodynamics, simplified suspension and low-profile tyres will all be introduced to increase downforce and make it easier for drivers to overtake. A further innovation will see LED display panels positioned on each car’s wheel rims and bodywork ‘to provide information to spectators’.

New technical and sporting regulations are also planned to ensure a more level playing field, including limits to car upgrades over race weekends, the introduction of certain standardised parts, and tighter restrictions on wind tunnel testing and the number of times some components can be replaced.

Plans also call for the introduction of a new governance and prize fund structure. Details of the structure have not yet been disclosed, with discussions with teams said to be at ‘an advanced stage’.

According to the BBC, Mercedes, Ferrari and Red Bull - Formula One’s three leading teams - all opposed the ‘fundamentally flawed’ regulations but have reluctantly accepted them as a first step in the sport's widely called-for evolution.

“It is a major change in how the pinnacle of motor sports will be run, and for the first time, we have addressed the technical, sporting and financial aspects all at once,” said FIA president Jean Todt. “The 2021 regulations have been a truly collaborative effort, and I believe this to be a great achievement.”

This year’s Formula One World Championship continues in Austin this weekend with Mercedes driver Lewis Hamilton on the verge of claiming his sixth world title.