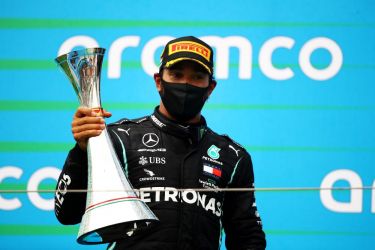 Formula One’s UK viewership for live racing and highlights surpassed 13.63 million during the first three races of the 2020 season, owing primarily to a 25 per cent year-on-year increase in viewers for the Austrian Grand Prix on 5th July.

The figures, compiled by Nielsen, show that the race drew just over 4.8 million viewers compared to the 3.84 million accrued during the 2019 edition, marking the highest UK audience for a Grand Prix held at the Red Bull Ring in the past five years.

The event, which saw the delayed 2020 season finally get underway behind closed doors in the wake of the coronavirus pandemic, also surpassed UK viewership for last year’s season-opener in Melbourne, which saw 1.4 million tune in to pay-TV broadcaster Sky Sports’ coverage.

Yearly UK viewership also grew by four per cent for the 2020 Hungarian Grand Prix held on 19th July, reaching 4.42 million viewers, marking the event’s second highest viewership in five years behind the 2018 edition, which had a more favourable highlights slot.

Meanwhile, the Styrian Grand Prix, which made its debut at the Red Bull Ring a week after the venue hosted the season-opener, attracted 4.4 million UK viewers as Austria became the first country to host back-to-back Grands Prix since two were held in Japan in October 1995.

The increase in viewership was recorded despite clashes with the restart of English soccer, which has seen the top-flight 2019/20 Premier League season and the remaining fixtures from the FA Cup return to play in recent months.

Excluding the Styrian Grand Prix, Formula One coverage on Sky Sports has drawn 758,900 more viewers so far in 2020 compared to equivalent events in 2019, while commercial broadcaster Channel 4, which only shows extended highlights, has seen an uplift of 377,300 viewers from last year.

Nielsen Sports Fan Insight found that 32 per cent of the UK population claimed they planned to watch F1 on TV when it resumed, a figure which rose to 69 per cent when applied to Formula One fans only.

Andy Milnes, head of client services at Nielsen Sports, said: “Like a number of sports which have resumed following the coronavirus lockdown, F1 has posted significant increases in TV viewership compared to pre-pandemic audiences.

“As our data shows, this has been driven by a renewed thirst for live action following months away from the race track and has seen Sky and Channel 4 pick up over a million additional viewers compared to comparative events last year.”

Nielsen’s figures were released ahead of the British Grand Prix on 2nd August, which is also expected to attract a bumper UK audience.

Last year, the event drew more than 4.8 million live and on-demand viewers across Sky and Channel 4, which came up against competition from Sky’s coverage of the men’s 2019 Cricket World Cup final (8.3 million viewers), as well as the men’s singles final of the Wimbledon tennis grand slam, which accrued a nine million peak audience during the BBC’s free-to-air (FTA) coverage.

Nigel Geach, senior vice president of global motorsport at Nielsen Sports, added: “As F1 prepares for its return to the legendary Silverstone track at this weekend’s British GP, we expect to see significant engagement from UK motorsport fans.”

Staying with Formula One, the motor racing series has also announced a partnership with the video platform YouTube to live stream the 2020 Eifel Grand Prix in Germany on 11th October in select European markets.