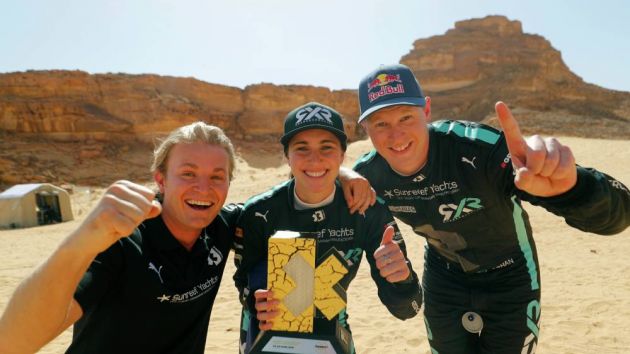 Extreme E, which made its debut in Al Ula, Saudi Arabia last weekend, confirms that China's state broadcaster CCTV, which aired the series’ inaugural race, will broadcast the remainder of the season on its digital platform.

CCTV.com is an outlet of the state’s China Media Group (CMG), which has a large sports offering including Formula One, the summer and winter Olympic Games, the Fifa World Cup, elite European soccer, the main global tennis tours, as well as domestic and overseas basketball.

In addition to broadcasting live coverage on CCTV.com, Extreme E will be available on CMG's Cbox and New TV platforms.

Extreme E is a brand-new electric SUV series with a focus on sustainability. In order to raise awareness, the series is visiting locations that have been affected by the negative impacts of climate change - Saudi Arabia, Senegal, Greenland, Brazil and Argentina.

"We are delighted to have confirmed Extreme E’s broadcast on China’s CCTV.com as well as being available on its state-of-the-art apps, Cbox and New TV - these are hugely exciting technologies that will bring an even greater audience to our championship," said series chief marketing officer Ali Russell.

"One of the missions of Extreme E is to highlight climate issues and encourage change and we can only do that by reaching as many viewers as possible."

Elsewhere in Extreme E, the series has announced insurance agent Allianz as its insurance partner and founding partner of the championship. As part of the deal, Allianz will provide Extreme E will joint insurance cover.