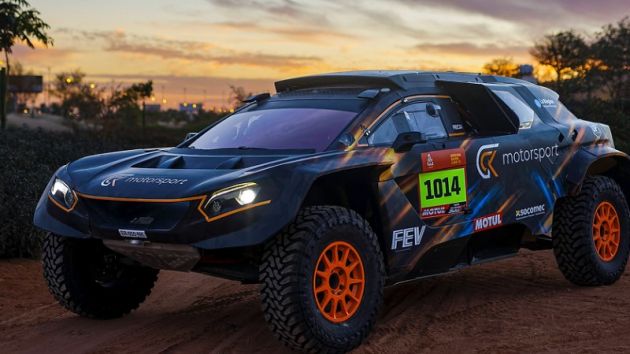 Green Corp Konnection (GCK) Motorsport have unveiled a new hydrogen-powered prototype car which the team plans to run in the Dakar Rally in 2024.

GCK Motorsport initially announced they developed the vehicle, known as the GCK E-Blast H2, in 2020.

Ahead of the GCK E-Blast H2's entry into the Dakar Rally in 2024, the team will continue to operate their current vehicle, known as Thunder DKR, in the Dakar Rally. The new car runs on sustainably produced biofuel and will be used to gather additional data.

According to Autosport, GCK Motorsport's E-Blast H2 has been developed alongside German engineering firm FEV and includes a hydrogen fuel cell which includes 20kg of hydrogen at a pressure of 700 bar, capable of delivering 200kw. The cell is also connected to a lithium ion battery which produces 50kwh.

GCK Motorsport will continue to test the E-Blast H2 in February before rolling out the prototype. The new car will then undergo its first desert-based testing in June and July with the aim of completing some stages in the 2023 Dakar Rally.

"We are very proud to be presenting the first ever hydrogen cross-country competition car with an integrated fuel cell," said Eric Boudot, chief executive of GCK and GCK Motorsport.

"For Green Corp Konnection, motorsport represents a unique innovation laboratory to develop technological solutions that we will then be able to offer to clients through our industrial activities. We are incredibly excited to be involved in the #DakarFuture movement and to create more milestones on the road to greener mobility solutions."

The 2022 edition of the Dakar Rally is under threat with the French foreign minister Jean-Yves Le Drian stating that the country is considering pulling out of the event following a suspected terror attack.

Currently, the incident is being investigated as a terrorist attack and security has been tightened.

"We made it known very quickly and told the organisers and Saudi officials that we had to be very transparent about what had just happened, because there were hypotheses that it could be a terrorist act," said Le Drian.

"There have already been terrorist acts in Saudi Arabia against French interests, it was important to protect our citizens, to warn, to prevent and to ask for the greatest transparency, so the national anti-terrorist prosecutor’s office was called in and today we have this situation: there could have been a terrorist attack against the Dakar.

"We thought that perhaps it was better to suspend this sporting event, but the organisers thought not, but we have to be very prudent. At the very least, they had to reinforce security, which they have done. The question is still on the table."

The Dakar Rally is operated by the French-based Amaury Sport Organisation (ASO), which also runs the Tour de France, with Saudi Arabia having hosted a leg of the event since 2020.