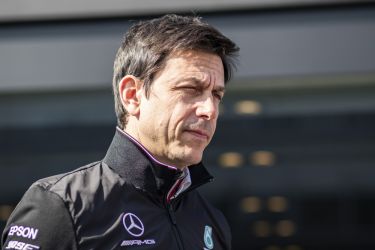 Mercedes’ parent company Daimler has rejected reports that the German brand could be about to pull out of the Formula One global motorsport series and that Toto Wolff was planning to resign as the racing team's managing partner.

At a time when six-time world champion Lewis Hamilton has been discussing a new contract with the Silver Arrows, reports in Germany suggested Wolff might step away from his current role in order to partner with Lawrence Stroll to oversee a buy-out of Mercedes.

However, a statement from Daimler reaffirmed its commitment to Formula One.

'Speculation regarding a potential withdrawal from Formula One continues to be unfounded and irresponsible,' the statement said.

'The sport has taken the right measures to address the consequences of the Covid-19 pandemic and its future financial sustainability, and we welcome these steps.

'It is our clear intention to continue competing in Formula One as a Mercedes-Benz works team in the years to come, and to do so with our managing partner Toto Wolff.'

This week the International Automobile Federation (FIA), motorsport's global governing body, has approved plans to introduce strict budget caps which will see the amount each team can spend annually reduced in each of the next three years.

The move is expected to hurt the big teams the most but it was approved unanimously, deemed necessary both due to the pandemic and the need to increase competition.

Mercedes have won the drivers’ and constructors’ championships in each of the past six seasons, having been the class of the field during the turbo-hybrid era.

In 2019, the team won 15 of the 21 Grands Prix as Hamilton and Valtteri Bottas finished first and second in the standings.

Wolff, who joined the team in 2013 from Williams, has masterminded that run of success but there have been suggestions the Austrian – who owns 30 per cent of the team – could be seeking a change.

Hamilton, who is out of contract with the team this winter, has previously indicated his next move could depend on that of Wolff.