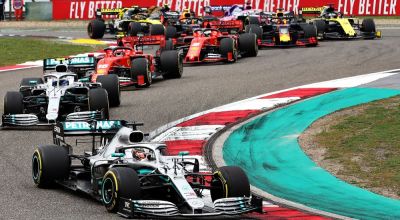 Global motorsport series Formula One has officially postponed April’s Chinese Grand Prix due to the outbreak of coronavirus in the country.

The announcement came after Formula One and global governing body the International Automobile Federation (FIA) jointly accepted a request from race promoter Juss Sports Group to postpone the race in order to ensure the health and safety of staff, drivers and fans.

Formula One and the FIA said they will now monitor the situation and work with all involved parties to study the viability of rearranging the Chinese Grand Prix for later in the year should the situation in China improve.

‘The Chinese Grand Prix has always been a very important part of the F1 calendar and the fans are always incredible,’ Formula One said in a statement. ‘We all look forward to racing in China as soon as possible and wish everyone in the country the best during this difficult time.’

Formula One sporting director Ross Brawn said last week that the series would look to reschedule the Chinese Grand Prix should it be called off, but it will likely be difficult to fit the event into a calendar which already features a record 22 races.

The Chinese Grand Prix was originally scheduled for 19th April and would have served as the fourth race on the 2020 calendar. Its omission leaves a four-week gap in the Formula One schedule between the inaugural Vietnam Grand Prix on 5th April and the returning Dutch Grand Prix at the beginning of May.

It is the first time that a Formula One race has been scrapped since the 2011 season, when the Bahrain Grand Prix was called off due to social unrest in the country.

UK newspaper The Times also noted that Formula One has held conversations with Vietnamese race authorities regarding the Grand Prix in Hanoi, although that event is reportedly expected to go ahead as planned.

The Chinese Grand Prix is the latest sporting event to be called off due to concerns over coronavirus, which was declared a global health emergency at the end of January and has now claimed more than 1,100 lives.

All-electric racing series Formula E recently called off its ePrix in Sanya, while the World Indoor Athletics Championships, scheduled for March in Nanjing, have been postponed until next year.

The outbreak has also affected both continental and domestic soccer competitions, as well as tournaments in skiing, table tennis and golf, among various other sporting events.

Organisers of this year’s Tokyo 2020 Olympic Games have also said that they are “seriously concerned” over the spread of coronavirus and its potential to hamper preparations for the event.