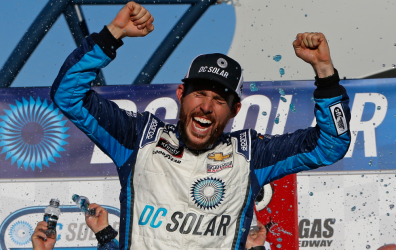 The Chip Ganassi Racing stock car team has been forced to shut down its Nascar Xfinity Series outfit due to a lack of sponsorship.

The team, which won six races with three different drivers during the 2018 season, had previously announced that Ross Chastain would compete full-time in 2019 with backing from DC Solar.

In December, however, the headquarters of the renewable energy company and the home of its owner Jeff Carpoff were searched by the FBI, which seized several items in the raids. The FBI has not yet provided a reason for the search.

As a result of the FBI investigation, it would seem that DC Solar is unable to fulfil its sponsorship of Ganassi Racing’s Xfinity Series outfit, forcing the team to close.

"Due to a lack of sponsorship funding, we will cease operation of the number 42 Xfinity team in 2019," team owner Chip Ganassi said in a statement. "This was a difficult decision for me to make, and it comes with much anguish, as this is a championship-calibre team and more importantly because it affects a number of good people's livelihoods. Running a car without proper funding is difficult to do."

Ganassi Racing’s Xfinity Series team is the second Nascar outfit in recent months to cease operations due to a lack of funding after 2017 Nascar Cup Series champions Furniture Row Racing were forced to close at the end of the 2018 season.

Elsewhere in Nascar, outdoor and conservation company Bass Pro Shops has extended its backing of Martin Truex Jr, who was previously of Furniture Row Racing but is joining Joe Gibbs Racing in 2019. The company will prominently feature on Truex Jr’s number 19 Toyota Camry for 24 races during the upcoming campaign.