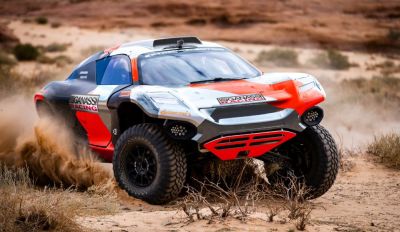 CGR, who have enjoyed considerable success in the IndyCar Series and Nascar Cup Series in the US, are the second major American motor racing team to be confirmed for the series, following rival outfit Andretti Autosport, whose entry was announced in April.

The move marks the first time that CGR, who have also recorded victories in iconic races such as the 12 Hours of Sebring and Le Mans 24 Hours, will compete in electric motorsport in their 30 years of existence.

“Extreme E is a very different proposition to anything we have done before, but it’s where I think motor racing is headed in the future,” said CGR owner Chip Ganassi. “When I started our team in 1990, one of the founding principles I built it on was innovation. I’ve always been passionate about pushing the boundaries of what is possible, and Extreme E checks that box for us in a big way.

“It represents an opportunity in motor racing to use the latest technologies to attract a new, younger audience to this great sport of ours. Everything about Extreme E is cool, from the car to the race format and the in-built technology.”

Established by the organisers of all-electric Formula E, Extreme E will aim to highlight the impact of climate change on some on the world’s most remote locations.

Next year’s inaugural season will feature five competitive events in places such as Kangerlussuaq in Greenland, the Amazon Rainforest in Brazil and Lac Rose near Dakar in Senegal. Each leg comprises two days of head-to-head knockout racing around 10km circuits.

Extreme E, which last week confirmed each team will be composed of a male and female driver, said further entries will be announced ‘over the coming weeks’.

Commenting on the addition of CGR, Alejandro Agag, Extreme E’s founder and chief executive, said: “CGR boasts a tremendous heritage and pedigree in motorsport, achieving consistent success over three decades in some of the toughest single-seater and sportscar series around.

“Of course, our championship poses a very different kind of challenge, but the team has proven itself to be a winner in every discipline it has contested and clearly possesses the skillset to similarly excel in Extreme E.”