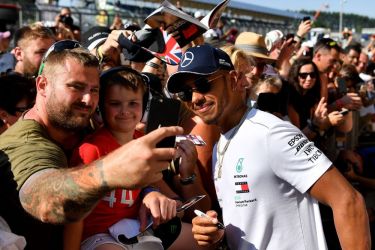 The Silverstone Circuit, home of the British Grand Prix, is set to report a record revenue of UK£59.3 million (US$73.1 million) for 2018 thanks to a nine per cent increase in sales from its flagship Formula One race, according to the Telegraph.

The owners of the track, the British Racing Drivers’ Club (BRDC), saw income from the event jump courtesy of a then record 140,500 crowd watching Sebastian Vettel beat Lewis Hamilton to victory last year, with the British newspaper reporting that accounts due to be filed later this month will reveal that the BRDC’s financial results are “exceeding its target significantly”.

The Telegraph adds that in the in the year ending 31st December 2018 around half of the company’s revenue was generated by the British Grand Prix, although other areas of the business did not perform as well.

The BRDC apparently lost UK£2.6 million (US$3.2 million) of revenue following the sale of its Lotus dealership in April 2018. It also had to refund more than 40,000 fans after Silverstone’s round of the MotoGP motorcycling championship was cancelled when drainage issues meant the track was deemed unsafe due to standing water. The BRDC incurred a UK£1.6 million (US$1.9 million) impairment charge as a result.

The group’s financial position should further improve in 2019, according to a letter seen by the Telegraph from BRDC chairman John Grant to members.

Numbers for this year’s British Grand Prix increased again to 141,000, with Grant reportedly adding that “early ticket sales for 2020 are currently up on last year by no less than 50 per cent”.

Furthermore, the venue will benefit from a reported 25 per cent reduction in its Formula One hosting fee next year as it enters a fresh agreement to host the event until at least the end of 2024.

Silverstone also signed a two-year agreement with the Oak View Group (OVG) last month to be part of an initiative which will see the venue development company help to attract high-profile events, such as concerts and festivals, as well as securing an annual naming rights partner for the circuit.