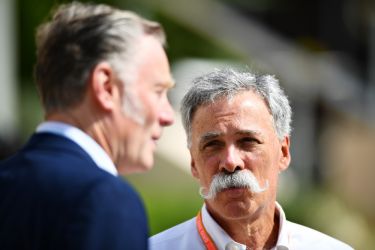 Formula One’s chief executive, Chase Carey, says no decision has been made regarding the future of the global motorsport series’ commercial managing director, Sean Bratches, but admits options are being discussed.

Bratches took charge of Formula One's commercial operations as one of Liberty Media’s key men when it gained control of the series back in 2016, but reports emerged in September that the 59-year-old would vacate his role as part of an organisational restructuring.

According to Autosport, Bratches would prefer the role involved less travel. Though he personally works out of London, his family remain based in the US and he attends most Grands Prix.

“In terms of Sean, I'm discussing. We're engaged. No decision has been made,” Carey told reporters during last weekend's Abu Dhabi Grand Prix, the final race of the 2019 season. "Obviously Sean lives a unique life where he's got a family that lives in the United States, and he lives in London.

"Right now we don't get a chance to breathe. So, when we get past this weekend and get back to London we'll have a chance to sort of talk about where do we go from here. But we haven't made any decisions."

"I enjoy the challenges of F1, and that's all I'm focused until I'm not able to deal with it.

"I'm excited about the future. If at some point either I drop or Liberty gets tired of me, then we'll figure out what comes next. But it probably would just not be productive to try to debate that publicly."