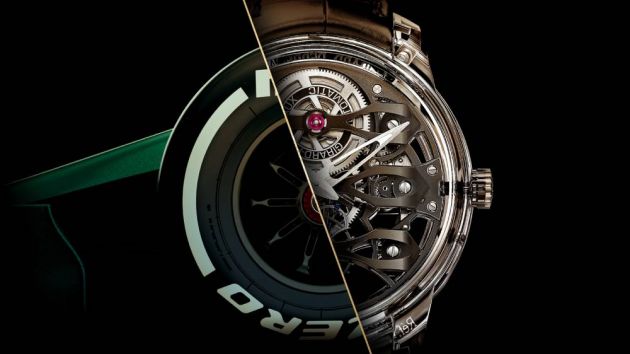 The Aston Martin Formula One team have announced a partnership with luxury Swiss watchmaker Girard-Perregaux which will see the pair collaborate on a selection limited-edition timepieces.

In addition, Girard-Perregaux’s branding will feature on Aston Martin's car and the team uniforms for the 2021 season from the Bahrain Grand Prix onward.

"Aston Martin and Girard-Perregaux share so many brand touchpoints – a rich history, a glorious heritage, and a relentless devotion to the pursuit of premium quality combined with high technology," said Aston Martin chief executive and team principal, Otmar Szafnauer.

"On the racetrack, time, too, is of the essence. Formula One and Aston Martin Cognizant Formula One Team in particular will prove themselves to be respectively a fantastic promotional platform and a brilliant marketing partner for Girard-Perregaux."

Elsewhere in Formula One, Sauber Motorsport, managers of Alfa Romeo, have announced Zadara as their cloud supplier for the 2021 season.

Access to Zadara’s cloud technology, used to collect and store telemetry on-track and on the cars, will be supplied to Alfa Romeo for instantaneous analysis. Zadara will also streamline Sauber Motorsport's cloud infrastructure as part of the agreement.

In return, Zadara gain branding on the Alfa Romeo car and race suits for the duration of the season.