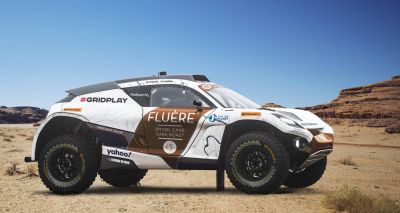 As part of the agreement, Andretti United's car will feature the Fluere Spiced Cane Dark Roast livery for the season-opening Desert X Prix, which will take place in Al Ula, Saudi Arabia from 2nd to 4th April.

"Preparation is fully underway for the inaugural season," said Michael Andretti, the chairman and chief executive of Andretti Autosport. "Each day we get closer to setting sail for the first race. We look forward to toasting to the new future of motorsports with Fluere.”

Zak Brown, team owner and chairman of United Autosports, added: "I hope we can do the company and all our sponsors who are supporting us this year proud at the opening round in Saudi Arabia in a few weeks’ time.”

Extreme E, the all-new, all-terrain championship, will see electric SUVs race in multiple climates across the world, including the Arctic and the Amazon Rainforest.

The five-race season will aim to highlight the impact of climate change on those locations and has already attracted the interest of Formula One champions Lewis Hamilton, Jenson Button and Nico Rosberg, all of whom have entered their own teams in the series.