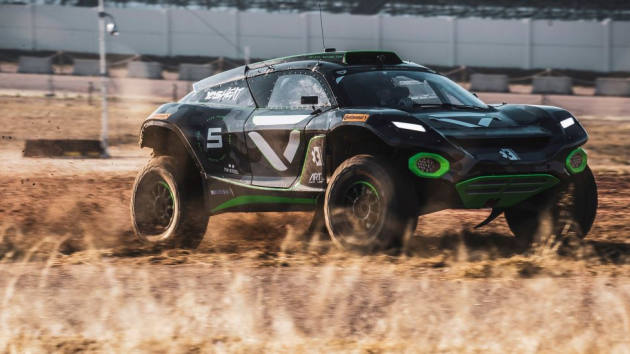 When Extreme E’s much talked-about inaugural season gets underway in Saudi Arabia this weekend, the all-electric SUV series’ nine-team grid will feature some of motorsport’s household names.

There will be a team owned by Formula One world champion Lewis Hamilton, one spearheaded by Jenson Button and another by Nico Rosberg, as well as entries from American powerhouses Andretti Autosport and Chip Ganassi Racing. In amongst them, though, will be Veloce Racing, the sister organisation of Veloce Esports that will be making its debut in competitive motorsport during the Desert X Prix in Al-‘Ula.

“It’s been a Herculean effort to get to this point,” Rupert Svendsen-Cook, the chief executive of Veloce Esports and team principal of Veloce Racing, tells the BlackBook. “Every single thing, every nut and bolt, every spanner, everything from the ground up we’ve had to assemble.

“But at the same time, we like to think that we’re bringing a young and fresh dynamic to the sport and to the series, because there is a lot of experience in the series from a team standpoint. We were at the first test of the year, we’ve got Lewis Hamilton’s team on one side, Rosberg’s team on the other side, and were surrounded by some motor racing royalty. And here we are, Veloce, a company barely three years old, alongside such company.

“It’s a privilege, and we’re really proud to be there, but at the same time we have to respect the competition, so we’ve put a lot into it.”

Veloce might not yet be a familiar name in racing circles, but the brains behind the team ensure that it is making its move into motorsport with no shortage of credibility. The team’s co-founder is Jean-Éric Vergne, the two-time Formula E champion and Svendsen-Cook’s former Formula Three teammate, while Adrian Newey, regarded as one of Formula One’s brightest engineering minds, is also part of the setup. Meanwhile, behind the wheel, Veloce have recruited defending W Series champion and Williams Racing development driver Jamie Chadwick, along with Le Mans Series winner Stéphane Sarrazin.

Beyond personnel, though, perhaps most intriguing are the foundations upon which the team has been built. While many of the Extreme E teams have storied backgrounds in motorsport, Veloce’s beginnings can be traced back to competitive gaming. It was in 2018 that - alongside his business partner Jack Clarke and Jamie MacLaurin - Svendsen-Cook established Veloce Esports, a business of 36 employees that runs its own motorsport-focused gaming teams and events, while also operating the Mercedes, McLaren and Alfa Romeo outfits that compete in the Formula One esports series.

It has become commonplace to see some of the biggest brands in motorsport explore the world of competitive gaming, but Veloce’s case is one of the first instances where an esports company has gone the other way.

“It’s funny,” says Svendsen-Cook, “because, for the last three years, wearing my esports hat, I’ve been telling the real world of motorsport - whether it be teams, drivers, manufacturers - that ‘you need esports more than esports needs you’, that gaming is the future, and here we are entering a real life racing team into an electric racing series - but for all the right reasons.

“Owning a racing team was a bit of an ambition and a goal of mine, but I always questioned the business credentials of owning a racing team. Whilst it has been tricky to get a racing team off the ground in the middle of Covid and at a time when marketing and sponsorship budgets are pretty low, we really believe in this series and everything that the series stands for, and all the reasons that we’re doing it are the right ones and good ones.”

It’s funny, because, for the last three years, wearing my esports hat, I’ve been telling the real world of motorsport that ‘you need esports more than esports needs you’.

As the latest undertaking by Formula E founder Alejandro Agag, sustainability is at the core of Extreme E, which is shipping the championship’s freight and infrastructure to some of the most remote locations on the planet to raise awareness of the damage climate change is doing to the environment. Svendsen-Cook says he is particularly looking forward to December’s Glacier X Prix in Patagonia, which sits alongside Saudi Arabia, the Senegalese coast, Kangerlussuaq in Greenland and Brazil’s Amazon rainforest as one of five stunning backdrops for Extreme E’s debut season.

And while Svendsen-Cook is keen to reiterate Veloce’s sporting ambitions – “we want to win,” he says – he is also well aware of the broader context within which the team is competing.

With that in mind, he points out that Veloce are already net carbon zero before the season starts, while everything in the team’s London office is built from reused wood and sustainable materials - including the chairs, which are made from recycled bottles. Even the team’s kit, provided by clothing supplier Regatta Professional, is being produced using 100 per cent recyclable materials.

When you realise we are just one month away from you 1st X-Prix �� Sound ON @ExtremeELive #LiveFast pic.twitter.com/pFX0whfS3G

On a series level, Extreme E is implementing a legacy programme to provide support to the locations that it races in, and it’s clear that Veloce understands its responsibility to be in tune with the championship’s sustainability goals.

“We practice what we preach, that’s for sure,” Svendsen-Cook declares. “Of course there are going to be naysayers to the fact you’re travelling around the world and you’re driving cars in remote locations directly affected by climate change, but without a doubt in every location that we go to we’re going to leave in a better state than when we arrived. And at the same time, with the global audience that the series attracts, we’re going to really deliver a message and drive awareness that I think will have much, much greater positive benefits.”

As Svendsen-Cook highlights, Extreme E has done an impressive job of capturing attention in the build-up to its first season, securing broadcast deals with some of the major media players all over the world, including Fox Sports in the US and Asia, ESPN in Latin America, Sony in the Indian subcontinent and Discovery-owned Eurosport. That broad distribution, coupled with the general interest in the series as a new concept, should ensure that there are plenty of eyeballs on the championship throughout 2021.

In terms of relevance to where we are today and where we’re going to be in five to ten years’ time, I honestly think I could win a debate that Extreme E is more relevant than Formula One.

Still, though, Veloce believes it can at least help encourage a different kind of audience to engage with Extreme E. Thanks to its endeavours in esports, the organisation has a sizeable existing following which it has built over several years and is hoping will now follow its journey into motorsport. According to the company’s website, Veloce counts more than 50 pro gamers and content creators on its roster, who together are helping the organisation achieve more than 190 million monthly views across its media network.

In terms of bringing that audience across in practice, Veloce is “involved in launching a game and an esports series” with Extreme E, according to Svendsen-Cook, who adds that the company’s network of creators, influencers and YouTubers will be “promoting us and banging the drum”.

“We already have a fanbase in the virtual world, we want to bring that fanbase into the real world with our real world racing team,” he continues. “They cross-pollinate so well, because we do an advertising or a media partner deal in esports and gaming across the media network. We can also promote it via Extreme E and align that brand and that campaign with all of the fantastic credentials that Extreme E has, essentially raising awareness for the climate emergency on the planet.

“It feeds itself, I think, so in the same way that we can sign up a sponsor or a partner into Extreme E, we can also directly plug them into the viewership and reach and engagement that we have on the esports side. It’s an overused word, but we like to think it’s an ecosystem that can fuel itself.”

Veloce will be racing in some of the most remote locations on the planet, starting with this weekend's Desert X Prix in Saudi Arabia

For all the anticipation around Extreme E – and there does seem to be plenty – just getting to this point has not been a straightforward task for an organisation branching out into a new space. To illustrate that, speaking to the BlackBook just under three weeks before the first race, Svendsen-Cook highlights that he and his team have “booked about five different flight routes” to get to the Middle East, all of which have been cancelled due to travel restrictions.

Despite the challenges of getting the project up and running during the pandemic, though, Svendsen-Cook is not lacking confidence about the long-term outlook both for his team and Extreme E as a whole.

“Certainly we want success this year,” he says. “The way we’ve prepared and everything that we’ve done to this point is with a view to the best performance that we can have for this season. I’ll be ambitious enough to say that we want to finish in the top three in our first year.

“That goes hand in hand with us using Extreme E as a platform to develop further renewable technology solutions and sustainable solutions and the rest. So I think where this series will go, and its relevance to the future of whether it be just the EV market or even wider than that, we really see a lot of potential in the series from that standpoint.

“I’m a huge Formula One fan and I’m not knocking Formula One here, but in terms of relevance to where we are today and where we’re going to be in five to ten years’ time, I honestly think I could win a debate that Extreme E is more relevant than Formula One.”