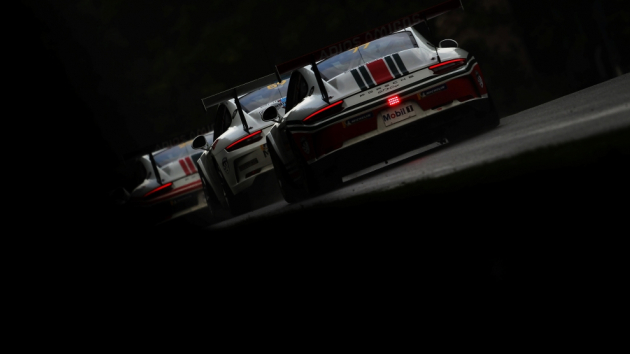 When the BlackBook last spoke to Michael Dreiser in early March, Porsche Motorsport’s director of sales said that things “weren’t getting easier” when it came to entertaining racing fans.

The prospect of maintaining excitement in a series where all cars are identical brings its own set of unique challenges, but a global pandemic is an entirely different matter.

Eight months on from the initial discussion pre-Covid, the BlackBook caught up again with Dreiser to find out how Porsche has coped amid the health crisis, the actions it took to get back to action, and what the series’ hopes are for the rest of the year and 2021.

Like all motorsport series, Porsche's one-make calendar was heavily disrupted by the pandemic

How would you assess the challenges brought on by Covid-19 since March?

Initially, there was the feeling of uncertainty. You couldn't fully grasp how big this was and what the timeline would be for the situation changing. It took a couple of weeks until everybody started frantically shifting everything around. We saw all the calenderers being delayed, but nobody dared even to take off an event. At first, everybody just pushed everything towards the end of the year. We ended up with a 45th version of a provisional global event calendar by May; every other day, and even sometimes twice a day, you would get new information about rescheduling and events being pushed back. It wasn't until early June that we really saw slight light at the end of the tunnel and some of the international events could restart in July and August.

When Formula One said they were going to go racing that helped to reassure everybody; if Formula One was going to go ahead then also, step by step, confidence would come back into all the other series. We’ve since tried to work within the given restrictions, which keep on changing frequently, but I think to a certain extent everybody has now started to at least know how to react and deal with them.

In general, when I look at the GT series and the one-make series as a whole we have suffered there, especially for those series which are largely international, for example in Asia. Over there, you have some very strict travel restrictions. But we’ve seen Europe take off again, as well as South America and North America. There is movement there and it gives us confidence.

How badly has the calendar been affected?

Up to now, we’ve only had to postpone the Carrera Cup Asia series because of travel restrictions. We've had to draw back in Canada simply because of financial constraints which the teams had and that left us with no other choice but to cancel the series there.

At the moment, we're still not 100 per cent clear how Australia will continue. We had the first support race for the Formula One Grand Prix in Melbourne on Thursday, just before the event was eventually canceled. Since then, it's been really tricky and we don't know whether the Carrera Cup will have a proper season finish because of the local constraints.

Apart from that, fingers crossed and touch wood, all the other championships have restarted. Some have a slightly condensed race calendar but we have some championships which actually have seen a growing rate compared to last year. So not everything went down the drain, so to speak.

How difficult has it been to implement the various health protocols at different events?

It’s a major challenge, of course. I think we got, for example, the last version of the Porsche Mobil 1 Supercup calendar only three and a half weeks before the first event in Austria. We've obviously played our part in organising the protocols there but I think, at the end of the day, it came to about 150 pages of procedures. We had them from the FIA [International Automobile Federation], the local promoters, Formula One, the different circuits, and there were Supercup specific regulations and procedures too. So there was quite a bit of administration, which also fell on our teams, but it was positive that so much work had been put into it all.

The most important thing is that we can ensure an event could be run even in the event of a positive Covid19-case in the paddock. By forming those bubbles, it gives the opportunity to, worse case, cut out that bubble without jeopardising the entire event. That helped to make everybody fully understand and observe the guidelines.

There was also great responsibility at the first events after coming back because all those governmental authorities who gave permission to stage these events were watching with eagle eyes. They wanted to check that everything went according to the procedures and plans. It was not only a responsibility to our own series but also everybody who is going racing at the moment and motorsports as a whole.

Have there been any positives during all this?

In every crisis or difficult situation, certainly in motorsport, people are looking for the positive side of things. We were planning to introduce the next generation of the 911 GT3 Cup car for 2021 and at one point we weren't sure if this would be the right signal to send. But, after talking to the organisers and teams, there was a clear confidence it would send a positive message. I was happy to hear that everybody pushed that we should go ahead with introducing the new car for next year. So that was a hugely positive sign.

Another highlight was how we handled the very special year for the Supercup. With three back-to-back-to-back races with Formula One and hence a very narrow calendar, we still managed to organise the season in style: proper organisation, proper sports and a thrilling season finale, deciding the championship in the last race.

On top, our colleagues even made use of the “spare time” from March to May to draw up a virtual edition of the Supercup so it was a very intense season for our guys. I’m proud about what was achieved despite all the challenges.

Have you had to completely rethink your strategy, both short and long-term?

I'm not a fan of thinking in extremes, but instead having a good mix of everything. You need to have a vision and a long-term goal but you should not manoeuvre yourself into a situation where you cannot react anymore on a day-to-day basis or to short-term events. Covid-19 has shown us that things can change overnight. Plus there are a lot of things up in the air at the moment for the automotive industry, which is in a phase of huge change and discussions about alternative engine concepts replacing the combustion engine, for example.

So, with all that said, you need to know where you want to go but you should also remain flexible in order to react to bumps in the road.

How do you think the motorsport industry has coped as a whole? Has there been much chance to innovate?

The esports side of things has received a huge boost. I'm looking forward to getting my hands on the figures at the end of the year in order to understand whether it was a temporary boost or gaming has got a huge tailwind to help establish itself as another tier of racing.

Generally, because close to no public is allowed at our events, we’ve had to rethink and reinvent how to communicate about the races. We've seen a huge boost on what was already quite big in terms of news dispatch around social media.

You also need to think about ways, if you cannot or are limited to having people at events, to get your partners involved on site. People have had to come up with alternative methods to cope with that situation in order to not lose sponsors.

We have seen in various areas that we cannot handle things the way we used to. We need to find other ways to make it all work.

What are your hopes for the rest of the year and going into 2021?

I hope that we can finish the season off as planned – especially at the moment [as] Covid-19-cases, particularly in Europe, are increasing again. We need to see then how 2021 will start. Covid won't suddenly disappear so we need to assess the evolving situation.

The question is in which region and in what intensity the pandemic still remains until we see some bigger solutions. Hopefully, we can get back to normal planning for 2021 with a race calendar that goes from January to December, rather than from August to the end of the year.