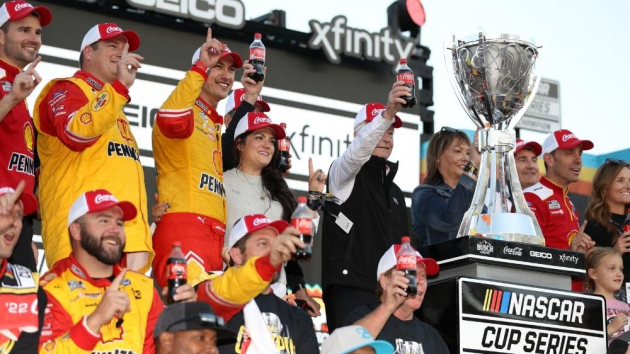 Taking the lead with just 29 of the 312 laps remaining in Sunday’s race at Phoenix Raceway, Joey Logano managed to secure the Nascar Cup Series championship ahead of rival contenders Ross Chastain, Christopher Bell and Chase Elliott.

It is his second title in the top tier of stock car racing and he has now reached the season-ending ‘Championship Four’ five times. It’s also the first occasion that Team Penske have won both IndyCar and Nascar championships in the same season after seeing Will Power triumph in the open-wheel racing series earlier this year.

However, hanging over the season finale was the tragic news of the passing of Coy Gibbs, vice chairman of Joe Gibbs Racing, son of Nascar and National Football League (NFL) Hall of Famer Joe Gibbs, and father of the 2022 Nascar Xfinity Series champion Ty Gibbs.

“Obviously the news this morning with Coy too, I don’t know what to think,” said Logano following his victory. “Obviously my condolences go to the Gibbs family, but [this is] just an incredible day for us, and [it’s] mixed emotions at the moment.”

Ty Gibbs managed to secure the title in the second-tier Xfinity Series just hours before the passing of his father, while Zane Smith secured the last Camping World Truck Series crown before it becomes known as the Craftsman Truck Series.

With another Nascar season in the books, the BlackBook looks back at a campaign permeated by unease around media rights and the rise of Formula One in the US.

Unrest behind the scenes

The prevailing storyline off the track this season has been discontent amongst the teams over Nascar’s domestic TV rights deal, with some team representatives becoming so impatient with the lack of progress that they even decided to go public with their concerns.

Nascar’s broadcast rights are currently held jointly by Fox and NBC in a deal worth a reported US$8 billion which expires at the end of the 2024 season. When the new deal starts in 2025, teams want an increase on their current 25 per cent cut of the broadcast contract. In terms of the overall revenue generated by Nascar, teams receive just seven per cent, so it’s hardly a surprise that the teams felt the need to go public. 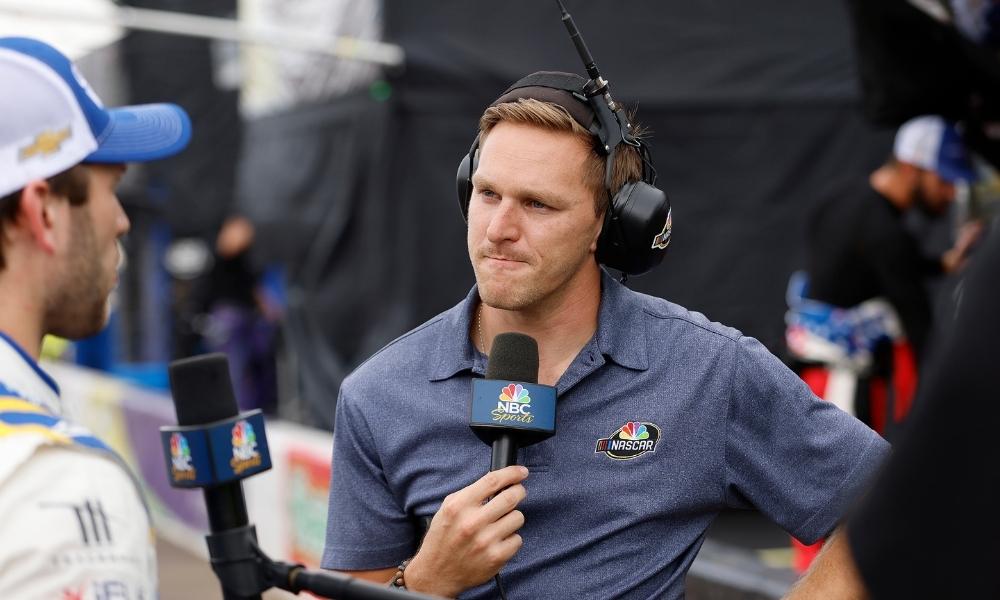 NBC and Fox have held Nascar rights since 2015, with the current deal expiring at the end of the 2024 season

According to Newmark, sponsorship accounts for between 60 to 80 per cent of a Nascar team’s overall revenue. This is substantially more than other properties like Major League Baseball (eight to 12 per cent), the National Hockey League (17 to 18 per cent), and English soccer’s Premier League (26 to 27 per cent).

The Race Team Alliance (RTA), the organisation that represents the Nascar teams, has even enlisted the help of Los Angeles-headquartered Wasserman ahead of the next TV deal to better understand the broader media landscape and where they fit into it.

If you listen to Nascar president Steve Phelps, though, interest in team ownership has “never been as high as it is right now”. Interestingly, his comments have been made at a time when Nascar only has three original equipment manufacturers (OEMs) competing, while the most advanced talks of a new entry with Dodge have stalled.

While teams look for a bigger slice of TV money, the series’ declining viewership is an issue that needs to be addressed.

Those in Nascar could highlight the ‘rising tide’ of motorsport as cause for optimism, but each individual series is ultimately competing against the other for eyeballs, and Formula One finally re-engaging with the American audience is competition Nascar does not need right now.

Nascar has experienced declining interest for a while now, especially compared to its heyday in the 1990s. That period saw the series expand beyond its traditional heartland, adding too many races to a bloated calendar at venues that didn’t deliver good racing for fans, testing their patience with the series. It’s not difficult to find a pertinent lesson in there for Formula One.

For now, though, Formula One continues to expand and its growth in the US has been exponential in recent years. The first tangible signs of that progress have started to appear this season, with the Liberty-owned series’ viewership on ESPN starting to outperform Nascar among the 18 to 49 demographic – a key audience for any sport looking to safeguard its future.

One only needs to look at Nascar’s flagship event, the Daytona 500, to see that its audience numbers are not trending in the right direction. An average audience of 8.87 million viewers for this year’s race appears good on the surface, especially when it’s an increase over the past two editions, but both of those suffered from delays due to adverse weather conditions. The last race to run without a delay, in 2019, averaged 9.17 million viewers.

Since 1974, average viewership for the ‘Great American Race’ has dropped below ten million just seven times. Five of those instances have come in the last five years, with the most recent edition delivering record-low viewership for a non-delayed Daytona 500.

There have also been issues with Nascar’s attempt at its own Drive to Survive docuseries. ‘Race for the Championship’ aimed to tell the story of the campaign while the racing was still going on, with the season finale airing before Logano clinched the title. However, the series has barely made a dent with hardcore Nascar followers, let alone encourage any new fans to watch the series.

It debuted with 233,000 total viewers on NBC’s USA Network before hitting a series low of 96,000 viewers on 29th September. The series has belatedly started streaming on Peacock, but it is too early to tell whether the additional distribution is having the desired impact.

Targeting new fans is crucial to Nascar’s short and long-term future, and the positive news is that the series appears to have recognised the need to embrace different initiatives to reach new audiences.

Nascar’s decision to enter the centenary edition of the 24 Hours of Le Mans 47 years after it last competed in the historic endurance race is evidence of that strategy. Putting itself in front of a different audience is the kind of approach the stock car racing series needs right now.

“Garage 56 is an opportunity to put Nascar back on the international stage,” John Doonan, president of the International Motor Sports Association (IMSA) and programme manager for Garage 56, told The BlackBook in August. “It’s a really special opportunity for the Nascar brand.”

While Nascar might be looking to broaden its horizons, it is also taking strides on the domestic front to ensure that its core fanbase doesn’t feel left behind.

Indeed, the series has taken the unusual step of sponsoring the University of Alabama’s collegiate athletic department, a move that should reinforce its presence in one of the sport’s traditional heartlands. 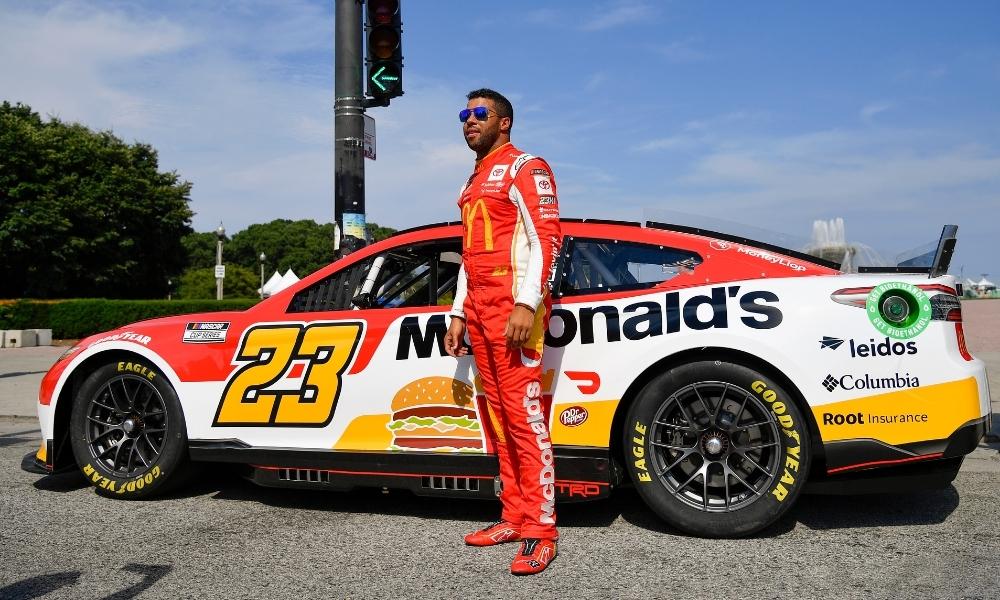 Efforts to reconnect with its traditional audience also include a move to stage next year’s All-Star Race at North Wilkesboro Speedway, one of the original circuits used for Nascar. It operated from the series’ inception in 1949 until its closure in 1996, but returning to previously popular tracks only forms part of Nascar’s scheduling plans moving forward.

The series recently made its first appearance on a dirt track since 1970, and Bristol Dirt will continue as an event after a popular first two races on the calendar. It will also continue to host the traditional preseason ‘Clash’ event away from Daytona, with the Los Angeles Memorial Coliseum set to stage the race in 2023 for the second consecutive year.

The big development next season will be the addition of the Chicago event, which will be the first-ever official street race in Nascar. There is a lot riding on its success, but a willingness to take risks with new race formats could be something that helps lure new fans.

Crucially, though, it has been reported that it will cost Nascar US$50 million to set up the Chicago race. Nascar, therefore, cannot afford for the event to fail, which would likely scupper plans to host more street races across the US, with other cities like New York, Denver and Portland currently under consideration.