A title battle that shouldn’t have been finally came to a fitting crescendo, with pre-season favourite Francesco Bagnaia securing his maiden MotoGP world championship in Valencia.

It was an apt title victory due to how utterly dominant the Ducati bikes, and Bagnaia in particular, have been this season, and it only lasted until the final race of the season due to the Ducati rider’s shaky early season form that saw him retire from four of the first ten races.

At the halfway stage of the season, the Italian found himself 91 points behind main title rival and reigning champion Fabio Quartararo, but the sheer lack of pace in the Frenchman’s Yamaha meant it was only a matter of Bagnaia finding consistency before he was overhauled.

And consistency is what Bagnaia found, only finishing outside of the podium positions twice for the final ten races of the season, with half of those races resulting in wins. In the end, he was so comfortable that he only required a 14th-place finish in Valencia to mathematically guarantee the title.

Yet, despite the on-track action consistently delivering, there is a certain level of unrest around MotoGP’s current standing in the motorsport world. Not a struggling series per se, but one facing issues in need of addressing.

This is despite a young flock of talented riders ready to lead the series forward. The top three in the 2022 championship standings were all born after Valentino Rossi’s first season in Grand Prix motorcycle racing, in what is now the Moto3 championship. This is the second consecutive season that this has happened, but MotoGP can’t seem to shake the shadow of ‘The Doctor’.

Case in point: MotoGP ran a news story confirming the attendance of the nine-time world champion on its website ahead of the season finale in Valencia. He still holds considerable weight, but this is something the global motorcycling series needs to transition away from. Carlos Ezpeleta, chief sporting officer for Dorna Sports, the promoter of MotoGP, told the BlackBook in September that the impact of Rossi’s retirement is “something [the series] has to live with”.

While MotoGP grapples with its future without Rossi, the BlackBook looks back over the issues that the elite class of motorcycle racing has faced during the 2022 campaign.

All eyes on me

Arguably the biggest issue MotoGP has faced this season has been surrounding audience and attendance, with much of this being covered in the BlackBook’s exclusive interview with Ezpeleta. Whether it’s the record-low British Grand Prix attendance or the failed launch of the MotoGP Unlimited series, MotoGP has found attracting fans a challenge.

With sprint races also set to debut in 2023, it remains to be seen whether MotoGP is doing enough to innovate in the face of its current state of stagnation. These issues don’t appear to be affecting the series to the same extent in its traditional strongholds like Italy or Spain, although the current dominance of the two nationalities across both the teams and governing bodies clearly helps.

MotoGP’s current security in its core markets was reflected in the recent rights extension with DAZN, with the over-the-top (OTT) streaming platform signing for an additional five years to secure exclusive broadcast rights in Spain until 2027.

According to DAZN, there has been a 62.1 per cent increase in viewers across MotoGP, Moto2 and Moto3, with MotoGP specifically experiencing a 71.4 per cent audience boost. However, it should be noted that there is no reference to the hard numbers behind these percentage increases.

One source of positivity, however, comes in the form of Indonesia. Having not had a race in the last 25 years, the motorcycle-crazed nation has deserved a Grand Prix for too long, and 2022 delivered it.

Capitalising on the popularity, MotoGP tied down free-to-air (FTA) broadcaster Trans7 to a four-year extension. One of the series’ longest-standing broadcast agreements, the extension takes the partnership close to 25 years. This year marked the first time the broadcaster could cover a domestic race during its contract, and MotoGP’s popularity was confirmed by a 40 per cent audience share for the race in the country.

While there may be a level of uncertainty among competing manufacturers, most notably Suzuki, who decided enough was enough and exited stage right at the end of the season, two of the series’ longest-standing team title partnerships live on.

Firstly, Yamaha and Monster Energy announced a multi-year extension that will see the energy drink company continue in the title sponsor role it adopted in 2019, having been an official sponsor of Yahama since 2013. Lin Jarvis, Yamaha Motor Racing’s managing director, said Monster Energy will remain title sponsor “for several seasons to come”, suggesting the partnership is likely to stretch beyond ten seasons.

Repsol and HRC first joined forces in 1995, in an historic alliance in the world of sport, combining passion, technology and the constant search for innovation. The story continues.

Then, in October, one of the longest-running partnerships in all of motorsport was prolonged for at least another two years, with the Honda team extending an agreement with Repsol, the Spanish petrochemical company, that began in 1995.

Those deals guarantee a degree of financial security for the teams involved and bring much-needed stability to the series – although it should be noted that Suzuki committed to MotoGP until 2026 just last year before bowing out.

One thing the continuation of the Repsol and Honda relationship does address, besides the team's need to generate all-important revenue, is the introduction of sustainable fuels.

A crucial piece of news that may have flown under the radar this season was the extension of MotoGP’s contract with Petronas, who will continue as the sole supplier for Moto2 and Moto3, the feeder series to the top tier. The Malaysian company, therefore, will be instrumental in formulating the direction in which MotoGP heads. 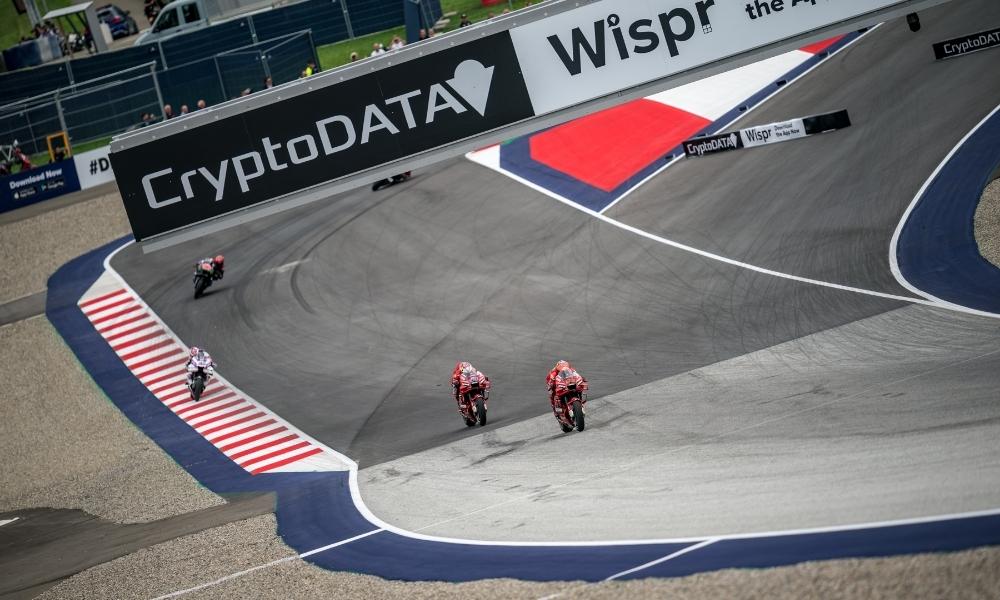 CryptoData Tech is just one example of the increasing presence of cryptocurrency within not just MotoGP, but motorsport as a whole

While all this goes on, however, there have been other decisions that appear to be at odds with a sustainable future. The two most recent Grand Prix title sponsorship deals were signed with companies involved in the world of cryptocurrency and blockchain, a sector that can hardly be called environmentally friendly.

Animoca Brands has already begun its deal, sponsoring the Grands Prix of Australia and Aragon this year, and the blockchain-focused software company will sponsor two further races in 2023. Similarly, CryptoData Tech was announced as the title sponsor of the Austrian Grand Prix starting this season after signing a three-year deal in July.

The cryptocurrency market has since further embedded itself into MotoGP, with CryptoData Tech becoming the majority shareholder of RNF Racing. The team had been looking for their third title sponsor in as many as years following the collapse of deals with Petronas and WithU.

A race against time

Further questions arise when you look at the recent race contracts that MotoGP has signed.

In September, Dorna announced a seven-year deal to host a race in India, a country which ranked last in the 2022 Environmental Performance Index. A letter of intent has also been signed with Saudi Arabia, despite increasing accusations of ‘sportswashing’ levied at the oil-rich Gulf state.

MotoGP also has the ignominy of having got into bed with two countries with questionable human rights records in the same month. That agreement with Saudi Arabia was swiftly followed by a five-year deal to race in Kazakhstan, a place where, according to Amnesty International, “people with disabilities continue to face challenges in claiming their basic human rights”.

Fair questions should be asked of all series within motorsport, not just MotoGP, about the places they choose to race. Sport can be a vehicle for progress, and never has there been a better time for motorsport to highlight its drive to achieve positive change. But the onus is on the top promoters to lead by example.