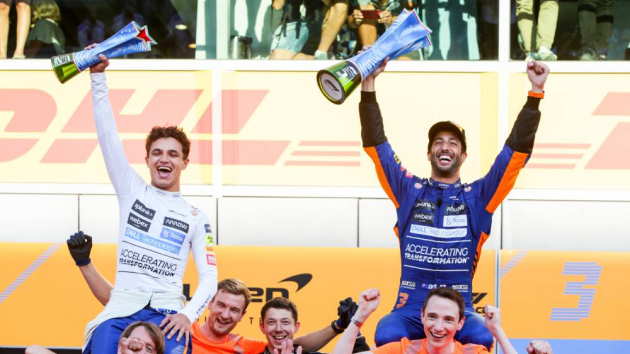 The 2021 season was one of significant success for McLaren Racing's Formula One division. Looking back to 2017, the team struggled with performance issues and an unreliable car, finishing ninth in the constructor’s championship. Fast forward to this year, the team finished fourth after a close battle with Ferrari and secured the season’s only one-two finish at the Italian Grand Prix, its first since 2012.

Needless to say, a lot of work has gone on behind the scenes to assist McLaren Racing’s rise. Under the leadership of chief executive Zak Brown, who took the helm in 2018, the British team has hired senior executives to oversee key commercial functions and taken steps to reposition its historic brand, in part by revamping and growing its sponsorship portfolio. New partnerships with technology-focused organisations like SmartSheet, DataRobot and QNTMPAY have brought a renewed focus on optimising on-track performances as well as helping to streamline operations off it.

The team has a dedicated following, including female fans and those under 25, which have historically been hard-to-reach demographics for Formula One properties. That fanbase is one of the reasons why McLaren has been able to partner with brands targeting this demographic, such as Coca Cola, Webex, Hilton, Bitci.com and Free Fire.

“I think our racing portfolio is probably the best in motorsports, in my opinion,” Brown told members of the media, including BlackBook Motorsport, during a recent roundtable.

“Lando Norris reaches female fans and people under 25. I think we're a team on the move. We're an exciting team, we're getting results. I think that's why people are attracted to McLaren Racing.” 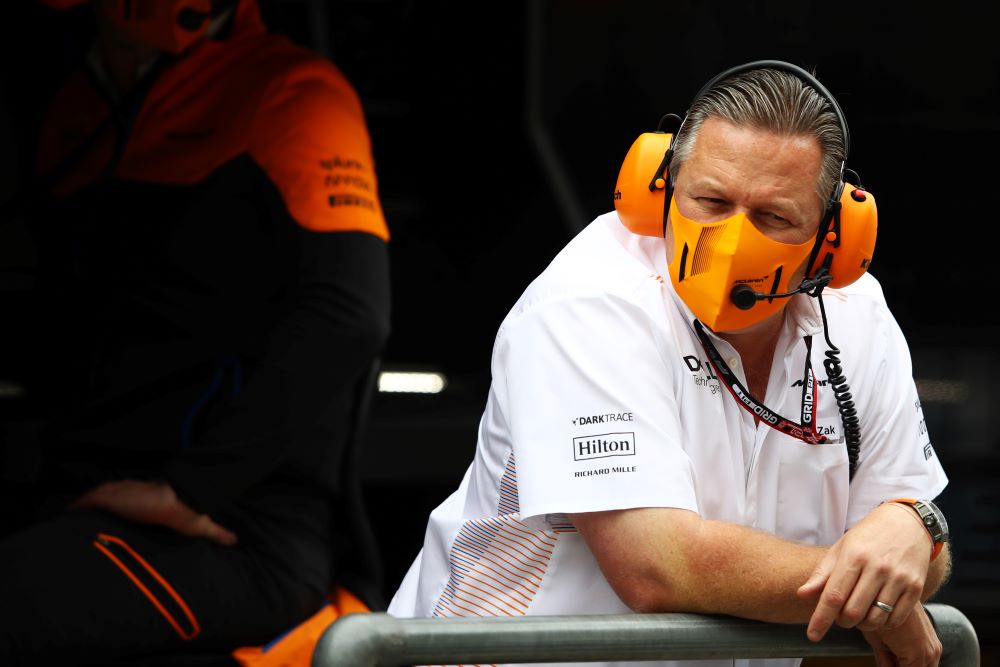 McLaren Racing has also entertained the prospect of bringing on a title sponsor for its Formula One outfit but has decided against it due to the desire to let its own brand shine through. The team has not had a title sponsor since the departure of Vodafone at the end of 2013.

“And, of course, we would entertain a title sponsor, but it's nothing that we're out pursuing. It's nothing that we have in our business plan. Therefore, I couldn't predict if we're ever going to have one again. We certainly entertain it. We're not adverse to having a title partner, but the way we've built out our commercial proposition, we don't need one.”

Formula One-focused Netflix docuseries, Drive to Survive, has brought of new fans to the championship and, by extension, the teams, including younger demographics, which Formula One has been eager to target over the past few years. With the fourth season of the show set for release in the next few months, Brown and McLaren are relishing the opportunity to connect with younger fans, especially those who are teenagers and young adults, and communicate the brand’s dynamic ethos and youthful personality to potential commercial partners.

“Netflix has done absolute wonders for our sport,” he states. “I can't recall seeing another media platform or another activity that's had the impact Netflix has had.

“I think Formula One has such an interesting storyline to it on the track and off the track that I think any other sport that could have a similar type of show would be good.

Indeed, the success of Drive to Survive has shone a light on the strong personalities within the Formula One paddock, including McLaren's wise-cracking driver Daniel Ricciardo and young star Lando Norris. 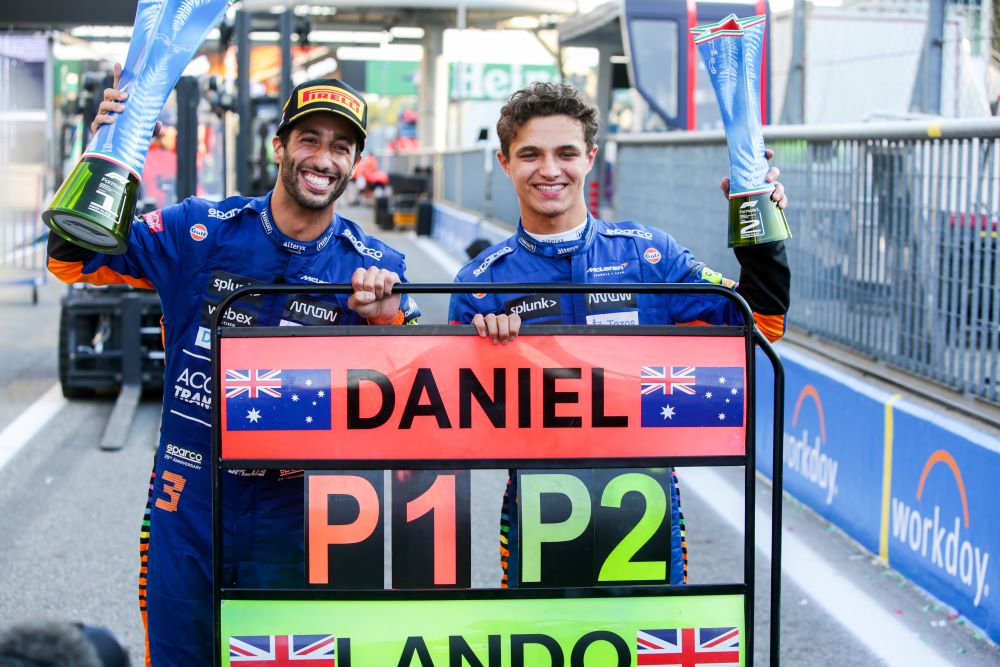 In addition to the boost that Drive to Survive has provided McLaren and Formula One, the team’s one-two finish at Monza, Italy during the 2021 season has put it in the spotlight once more. The impact of that victory, from a sponsor and fan perspective, has been beneficial to the team.

“It’s been awesome,” says Brown. “The morale boost it gave to the racing team, the reward for all their hard work that they've put in. It's been awesome. The sponsors loved it. I think the one thing that it did do that we just need to be careful of is not raise expectations to an unrealistic level too quickly.”

Whilst rising up the ranks in Formula One, McLaren have sought expansion into other motorsport series under Brown’s leadership. The team currently competes in IndyCar and esports, and is set to enter sustainability-focused electric SUV championship Extreme E in 2022.

McLaren has also agreed an option to possibly join Formula E for the series’ Gen3 era, which is set to come into play in 2022/23. Additionally, the British outfit has been exploring an entry into WEC's LMDh class for a return to the 24 Hours of Le Mans, the iconic endurance race the team won in 1995.

"We've been reviewing the World Endurance Championship," says Brown. "It's a series we very much like, and we've also been reviewing Formula E. Those are both under review, and I think we'll make some decisions on those in the next few months."

Brown added to Autosport: "Realistically it will probably creep into Q1 of next year, which technically we’re comfortable with. What’s been driving our timeline, if we were to enter, [is] the technical preparation that would need to be done to be prepared.

"We’ve just completed our first couple of days of testing in Extreme E. We’re ramping up for a third car [for the] IndyCar series in ’23. So I think it’s going to be early in Q1 before we make any final decisions."

Testing last week was fun! We can’t wait for more of this when the first race comes! �� pic.twitter.com/8qBTBJA5uL

Looking ahead, McLaren are facing a substantial challenge, along with the rest of the motorsport and automotive industries, to become more sustainable. With deadlines to hit carbon emissions targets moving rapidly closer, Brown is keen to help improve motorsport’s image, insisting that it is no longer the gas guzzling giant it once was.

“The biggest challenge has been around sustainability,” he explains. “I think there is a perception that motorsport doesn't play well in the sustainability space. I think that is not the reality, I think we can do a lot better.

“But I think we're guilty of doing a very poor job as a sport, of communicating the wonderful technology developments around fuel efficiency. Unfortunately, as a sport, instead of talking about what an impressive accomplishment [it was] when we went to hybrid engines, we've tended to kind of focus on the sounds.”

Despite this, McLaren have established a dedicated environmental, social, governance (ESG) programme and recently signed up to both the UN Sports for Climate Action Framework and the UN Race to Zero pledge during the Cop26 Climate Change Conference in Glasgow. In addition, the team’s entry into Extreme E from 2022 demonstrates that it is dedicated to reducing its carbon footprint. Extreme E is focused on education and inspiring action in the field of sustainability and gender diversity. Teams have to participate in sustainability-focused activities in each race location, highlighting McLaren Racing’s plans to cut down on its carbon emissions.

"I think there is a perception that motorsport doesn't play well in the sustainability space. I think that is not the reality, I think we can do a lot better."

“I think sustainability is on very much on everyone's mind,” says Brown. “We've been carbon neutral with our buildings since 2011. And the FIA Carbon Trust award, we were the first Formula One team to win that and have maintained that ever since. For comparison, the next team did not get that same award until 2020.”

In addition, Formula One is poised to introduce significant rule changes in 2022, including an overhaul of its technical regulations. Those changes are designed to act as a ‘soft reset’ and level the playing field for smaller teams from next season.

“I think it's the single largest rule change that we've seen in the history of the sport, certainly in modern times,” says Brown. “Developing a new race car from ground up where you're not pulling over anything from the previous year is a unique situation.” 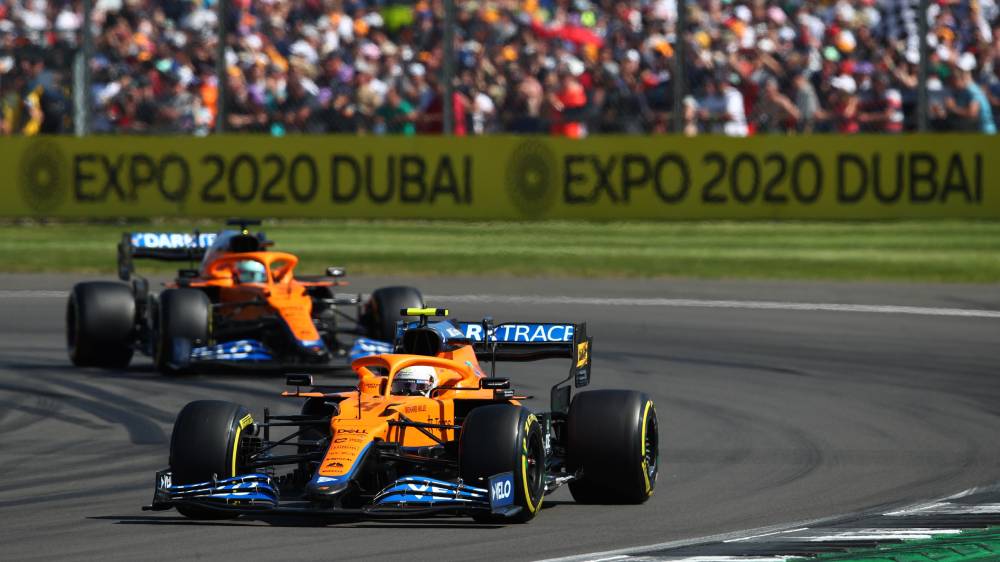 Although improvements have been made, McLaren Racing still has some way to go before the team can compete for championships

Although McLaren have made significant gains in 2021, Brown is not expecting the team to be fighting for the Formula One title in 2022. Instead, he expects it to be another step in the right direction and an opportunity to strengthen the team's position further before fighting for championships once more in a few years.

“I would not anticipate us competing for the championship next year,” he says. “Of course, we're going to give it everything we've got.
“But we still have a couple of years of technical catch up that we just can't accelerate any further or any faster than we are. It’s great we won a race this year.