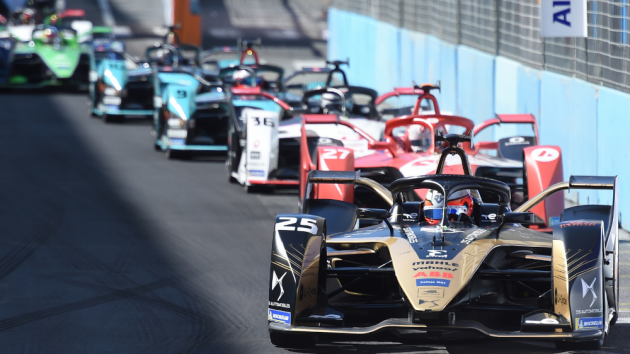 The well-known story of an idea being scrawled on a napkin was emblematic of the lack of expectations placed upon a sport taking its first tentative steps into the world of electrification. After all, Aarti Dabas, chief media officer for Formula E, points out that “when we started out, we didn’t have many people talking about electric, but now everybody’s talking about it”.

But it was this lack of expectation that also enabled the series to flourish. “The reason we could do things differently was because we were young, there was no expectation,” explains Dabas. “Innovation was at the heart of the product, so we could explore ideas such as Attack Mode.”

It was innovations like Attack Mode that helped Formula E to stand out from the crowd, while ‘FanBoost’ allowed the sport to target social media by enabling fans to vote for drivers to receive a short increase in power during the race. With Formula One’s stratospheric rise across social media in recent years, it’s easy to forget how much of a closed shop it used to be under the stewardship of Bernie Ecclestone. So, when Formula E took an early decision to target digital channels, it was indicative of the disruptive path the sport was looking to take.

When starting on this digital journey, however, the message was crucial to determining the audience the series would attract. As Dabas explains, it came down to two key pillars. “Firstly, we put purpose at the heart of our sport. We didn’t, therefore, need to find it, as sustainability was already in our core, both from an innovation and social point of view.”

She continues: “The second was, unlike other sports that harness passion to grow an audience, we harnessed our purpose to grow our audience and fan engagement. Partners and teams are attracted to us because we have this platform that leverages the power of electric racing for the benefit of sustainable human progress.” 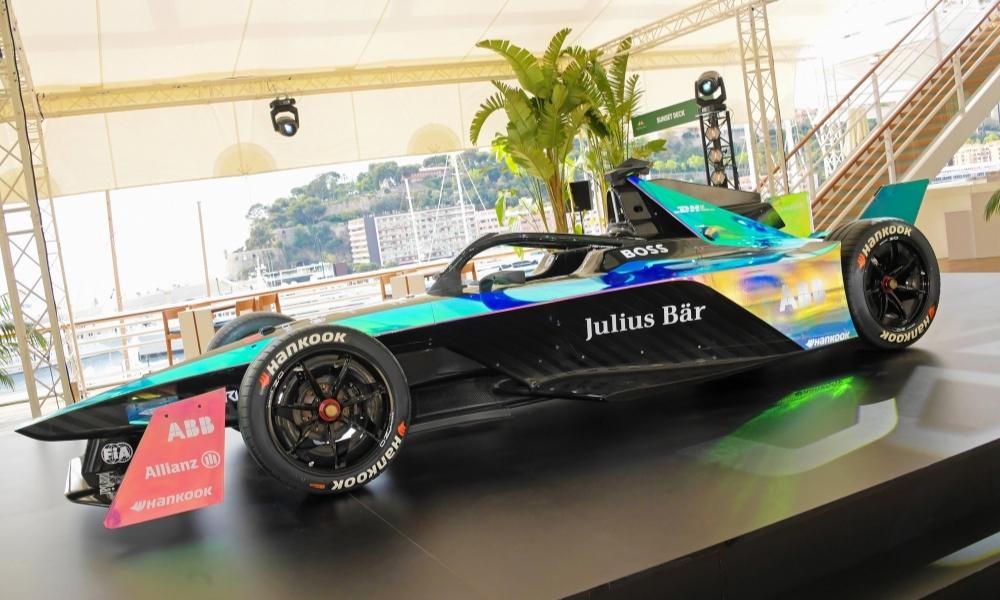 The new Gen3 Formula E car adorned with sponsors who have supported the series since the beginning, such as Julius Baer and ABB

It was this purpose that enabled Formula E to carve out a niche for itself among more established motorsport series, and also saw it attract partners that remain to this day. “If you look at our founding partners – ABB, Julius Baer, Michelin, BMW, and Tag Heuer - they’ve been with us right from the start of the journey. The audience wasn’t initially there, but they bought into the vision of scaling it and engaging a new fanbase,” explains Dabas.

It wasn’t just partners that have bought into the vision, either, as manufacturers continue to want to be involved with the message the sport is trying to convey. That theory might have been tested when German carmakers Audi, BMW, and Mercedes all decided to depart the series after the 2020/21 campaign despite their focus on electric vehicles (EV). In January, however, Maserati became the seventh manufacturer to commit to Formula E next season, which Dabas points out is more than any other championship. Since then, motorsport specialist Abt has also confirmed its return to the series, further highlighting just how relevant the vision remains today.

What’s more, says Dabas, is that the teams are involved with the sport every step of the way.

“The teams are invested in growing the championship as much as we are,” she highlights. “We are all ultimately partners in the success of our sport, all of us together is better than Formula E alone.”

While it’s around 18 months since Formula E became the first and only global sport to have a net zero carbon footprint since its inception, the focus is now on the next step as the sport finds itself at a crossroads.

“Sustainability is in our DNA and, while there are always challenges within this, it’s also our biggest opportunity,” says Dabas. “We are at the crossroads of racing and reason: we race for a reason, and that reason is quite important in people’s lives. But would somebody watch a sport because it’s sustainable? Is that enough? People watch sport because it’s exciting and entertaining.”

This focus on entertainment is what’s driven the radical Gen3 regulations, set to be introduced for the 2022/23 season. The car will feature both front and rear powertrains, totalling a regenerative capability of 600 kilowatts (kW). The electric motor will deliver 350kW of power, allowing the cars to reach top speeds of 200 miles per hour. The car is also 60 kilograms lighter than its predecessor and will be smaller in size to better suit racing on street circuits – a notable diversion from Formula One’s technological trajectory.

The reasons behind this change all fall under a shift in approach for Formula E across the board. “We are gradually moving away from just being called a motorsport series, we’re going to define a new segment of tier one sports,” claims Dabas. “That’s what our aim is, being an exciting sport with a purpose at its heart, rather than a sport that’s trying to find its purpose.”

The goal? Converting more motorsport fans into Formula E fans. This is the overarching narrative behind the introduction of the Gen3 regulations as the sport strives to improve the product on display for those watching at the track or from home. “It’s faster, it’s lighter, it’s more agile, it’s going to make exciting racing – the tech is important, but what fans see is the product, the racing,” explains Dabas. “The conversion of motorsports fans into Formula E fans? It will happen as long as we have exciting racing.”

This season, for example, has seen the introduction of an all-new qualifying format where the drivers compete head-to-head in duels for pole position. “We did some fan research – which was more qualitative – in Germany and the UK during the Saudi [Arabia] race to see what the fans liked about the broadcast,” says Dabas. “The new qualifying format was on top.”

The fan experience is now central to what Formula E is trying to achieve, and a large part of that came down to the period of reflection that was enabled by the Covid-19 pandemic. While Dabas admits that “if it wasn’t Covid, I think we would have still reviewed and changed some aspects”, the racing exodus did create a window for Formula E to regroup and refocus.

We are gradually moving away from just being called a motorsport series, we’re going to define a new segment of tier one sports. That’s what our aim is, being an exciting sport with a purpose at its heart, rather than a sport that’s trying to find its purpose.

In a way, it allowed the sport to take a step back in order to develop a more concise and meaningful strategy to better connect with fans.

“We changed our media distribution at the top,” Dabas begins, “so we said ‘less is more’. We had lots of broadcasters, and that was absolutely the right strategy at that time, but we reduced our broadcasters from 80 to 40 so [the viewers] could find where to watch races more easily.

“For example, if you were in Germany, you knew ProSieben was the place to go, it wasn’t three places. In the UK, there was a time when we had four or five broadcasters and, as a fan, it gets confusing.”

By streamlining the sport’s broadcast output, Formula E intends to put the fans at the centre of the product, with a focus placed on the live audience. This speaks to a broader change in tactics behind the scenes. When the series first started out, all the races were streamed on YouTube but, as Dabas admits, this “wasn’t really a content strategy, it was a case of ‘let’s push out more content’”. Whereas now, the increased focus on relationships with broadcasters means Formula E must have a more all-encompassing approach.

After the double-header Rome ePrix, Motorsportbroadcasting.com reported the viewing figures for the highlights of both races on YouTube. There were 61,000 views for race one and 35,000 views for race two on 11th April, just two days later. In the same amount of time, however, IndyCar had achieved 65,000 views on its highlights for the Grand Prix of Long Beach. What makes this notable is that Formula E has more than double the subscribers on its YouTube channel compared to the American series.

Which is interesting because @FIAFormulaE has more than double the subscribers of @IndyCar, yet it's the latter that is doing better.

In the past, this may have caused concern, but the new strategy is different.

“The Rome race was live on Channel 4 [in the UK],” explains Dabas. “The highlights for the Saturday race are put out on Channel 4 the [next] morning. That’s a more valuable and engaged audience [compared to] just putting it out on YouTube. YouTube works great as a catch-up function, and we also post shorter form content on other platforms such as Instagram and TikTok – the numbers are through the roof.”

“You can read several media releases that come out from different sports. Some say they have two billion fans in the world, some say they have 100 million. You actually don’t know what data point is – is it cumulative audience, unique audience, one-minute reach, ten-second viewing. What is it? For us, it’s not about chasing one big number, it is about consistency and measuring the reach and engagement of our fans to identify growth opportunities and track real growth.”

If anything, it would be easy for Formula E to chase the success of Netflix’s Drive to Survive series covering Formula One and want to replicate it. But, as Dabas explains, the situation is a lot more nuanced: “There’s not one platform that is the silver bullet for success. Every series has to think differently and see what the fans want. If we want to engage younger or more diverse audiences, we need to think what content and platform mix will help us achieve that.”

Interestingly, the one area that Dabas picks out from Drive to Survive is its impact on how the drivers in Formula One are perceived and, specifically, the rivalries it has created within the sport. She admits that, as Formula E has only completed seven seasons, “those rivalries have not been built yet”, but there is certainly scope for a more driver-centric approach.

“The [drivers] are super sharp guys,” Dabas adds. “Not only in [Formula E], but they think more about life, about how they operate, it means something to them. I think we need to do more to tell their stories because they’re such interesting and talented individuals.” 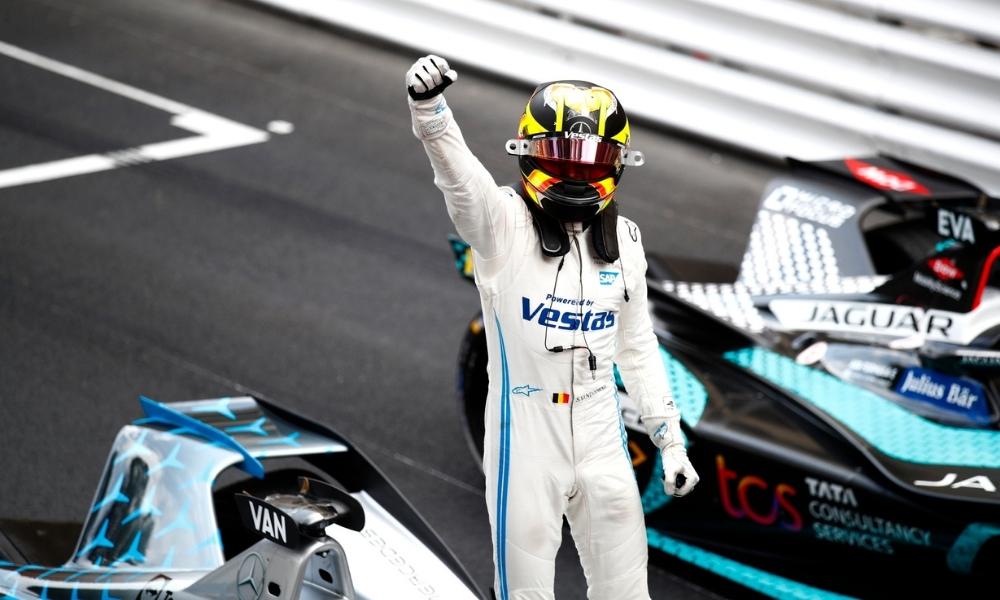 While that will take time to develop, the most important task facing Formula E is inspiring the next generation of motorsport fans, and ensuring the product being delivered on track drives conversation about the message at the heart of the sport.

For Dabas, there is already evidence of this working close to home.

“I look at the example in my family and the impact Formula E is having,” she says. “If you ask my seven-year-old daughter if she’s a motorsport fan, she’ll say no – she’s a Formula E fan. She’s seen a few other motorsport properties and just finds them boring because they are too long and, for her, Attack Mode is lighting up and [creating] energy.

“I think, ultimately, manufacturers, teams, and partners come to us for that: the larger purpose.”