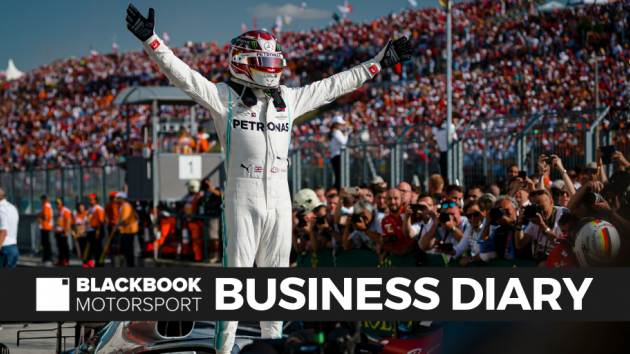 In what was a tense battle between Mercedes and Red Bull at the Hungarian Grand Prix, the defending champion looked like he would have to settle for second place behind the young Dutchman.

But the decision from the Silver Arrows to make an extra pit stop proved decisive. It gave Hamilton faster tyres for the latter stages of the race, enabling him to put the hammer down and close a 20-second deficit in less than 20 laps to pass Verstappen with three laps left and claim victory.

Sebastian Vettel finished third, pipping his Ferrari team-mate Charles Leclerc for the final podium place but the cars were never in contention for anything more, losing nearly a second a lap over the course of the race.

Heading into the summer break, Hamilton’s win leaves him 62 points ahead in the driver’s standings with nine races to go. A sixth title would appear a formality.

The Spanish Grand Prix looks set to stay on the Formula One calendar for 2020 after the Catalan government confirmed it would provide financial backing to stage the race.

Recent reports suggested a deal was close between Liberty Media and the Circuit de Barcelona-Catalunya, only for the government to clarify an agreement had not yet been reached.

Now the local government has released a statement backing the continuation of the Spanish Grand Prix, signalling a one-year extension is close to completion. Previous reports suggested a guaranteed financial commitment of €21 million (US$23.3 million) would be needed to host the race and that local authorities would cover any incurred losses.

The statement said: ‘The F1 Grand Prix in Catalunya is an asset that contributes to the positioning of Catalunya in the world in the fields of tourism and the automotive sector.’

Next year would mark the 30th consecutive edition of the Spanish Grand Prix, with the race having been hosted at the Barcelona-based circuit since 1991.

Live in race odds will be available from the start of the 2020 Formula One season following a trial with Sportradar and Interregional Sports Group (ISG).

The new arrangement will give Sportradar exclusive access to never before released historical Formula One data, as it forms new live odds models ahead of the season opening race in Australia next year.

Around 30 unique markets will be initially offered during qualifying and race day. There will also be markets beyond podium positions, with in-team competition and driver head-to-heads developing on a race-by-race basis.

Additionally, Sportradar will provide its integrity services to protect Formula One from potential match-fixing risks.

Tony Ragan, joint chief executive, ISG Group said: “The potential for pre-race and in-race betting is huge and Formula One itself is developing in a way that will continue to fuel opportunities for additional markets.

“The potential for the betting markets was perfectly illustrated at the French Grand Prix where Sebastian Vettel who, despite a later tyre change, secured the fastest lap in the dying seconds of the race.”

David Lampitt, managing director of sports partnership at Sportradar, added: “This partnership enables us to roll out enhanced data-driven products, which will provide additional betting opportunities both prior to and during live races, creating the most comprehensive offering available anywhere.”

Stilo has struck a deal with Mercedes to become their official helmet supplier.

Stilo first entered Formula One in 2016 and went on to provide helmets for a number of drivers, including Lance Stroll, Felipe Nasr and Jolyon Palmer. In 2018, it also produced the first race-ready ballistic-tested helmet concept to improve driver protection.

Formula One remains an untapped market for bookmakers, despite it being one of the richest data driven sports in the world

Lewis Hamilton didn't expect this moment with the @Champagnecarbon to come today...

But he definitely made the most of it! �� #F1 ���� #HungarianGP pic.twitter.com/jerbC1MAgC