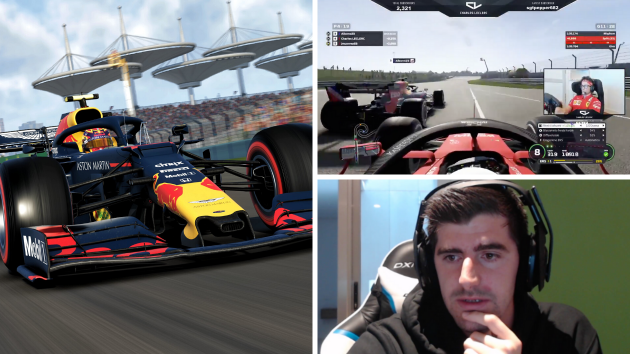 There was an almost unnerving level of realism as the cars lined up on the grid for Formula One’s inaugural virtual Grand Prix on 22nd March.

What followed after the lights dropped was an opening lap that blew away any hint of reality on Bahrain’s Sakhir circuit as drivers collided, cut corners and careered wide. It was exactly what Formula One wanted.

As the coronavirus pandemic continues to lay waste to the global sporting schedule, including the postponement of the 2020 Formula One season, the global motorsport series had scrambled aboard the esports bandwagon in a bid to appease fans with new live content.

Packing the field with current and former drivers, as well as a slew of celebrities, complete with pundit and commentary team, the need for the F1 Esports Virtual Grand Prix to land with supporters was evident. This was more than a novelty act.

The inaugural race was eventually won by China’s Formula Two driver Guanyu Zhou, but the result that really mattered to Formula One would come off the track, with ratings providing the true measure of the concept.

As the Esports Charts analytics agency would later report, viewership averaged 289,000 concurrent streams and peaked at 359,000, including 199,000 on YouTube, 180,000 on Twitch, and 18,000 on Facebook. It was what Julian Tan (pictured), Formula One’s head of digital growth and esports, hailed to SportsPro as the series’ “strongest esports showing since we entered that space”.

Tan has since revealed the race had 3.2 million online viewers, with an estimated 1.2 million watching on TV.

It may be premature to hail the virtual Grands Prix as a saviour for Formula One in the current climate. Likewise, dismissing it as a cost-effective way to plug the gap amid the lack of a real-life season also seems shortsighted.

It is the potential gateway to the new fan that helps drive Formula One’s esports strategy, explains Tan, who spoke to SportsPro about the new series and the significant role it can play amid the continued Covid-19 uncertainty.

What was the process for putting together the first virtual Grand Prix?

As soon as the postponement of the Chinese Grand Prix was announced, we started working on how we could use esports for race weekends and host a virtual Grand Prix. At that stage, the coronavirus wasn’t at the stage it is now, but when the news came through that the Australian, Bahrain and Vietnam Grands Prix were also going to be postponed, we then worked to refine the concept and come up with what you’re seeing now.

Obviously, the situation that we have with the virus at the moment has meant the wider sports industry has been affected and in these difficult times, esports can play an important role. People tend to look at sports as a form of escapism and relief, and esports is no different. We felt it was a real opportunity to work out how we could mobilise within esports to provide some fun racing action and light relief, with there being not a lot of sports or entertainment out there.

Major broadcasters such as the UK’s Sky Sports televised the race. Was it easy to get them onboard?

The reception has been really strong and positive. We have great partners with Sky in the UK and also more widely. They’ve leaned in quite a bit and have really supported us. They saw that the product itself resonated with the fans and audiences. So it’s certainly been a positive thing for supporters, as has working with our TV broadcasters and online partners.

Can we expect the virtual series to run further into the year given further cancellations in the sporting calendar?

The plan is to see how things develop. There is an opportunity for us to run a virtual Grand Prix on that weekend if further races are postponed. We’re currently planning for end of May and early June. More generally, with how we’re approaching our activities, we want to go back racing as soon as we’re able and esports offers that interim racing fix until then.

Are you considering running virtual Grands Prix alongside real races once the season resumes?

By that point, we’ll certainly have a lot of learnings to see how we evolve the product. We have our flagship virtual championship, the Formula One Esports Series, which we’re keen on launching as soon as we’re able to this year, so it will be very much a case of seeing where we are at the time. I would expect that with each virtual Grand Prix that passes, we will have learnings that we can take on to improve the product as we go and at that time have a better view on how it has evolved when the [real-life] racing gets underway.

Beyond offering live content, what is the main goal for the virtual series?

We would have had a Grand Prix on these weekends and for our fans this is a great way for us to use esports to bring some light relief. At the end of the day, this is an entertainment product, and I think the beauty of having our esports this way is that the game is so realistic, it provides quite an authentic way to consume racing as well for everyone. We want to be able to use esports at this time to provide entertainment. A lot of people do look to sports and entertainment as a way to find that escape, find that relief, and that’s an essential part of what we’re trying to do.

Will you look to apply any learnings from the virtual Grands Prix to your Pro Series?

It’s a slightly different product, but it’s actually given us a great opportunity as well to elevate the visibility around the Pro Series as well. After the latest virtual Grand Prix we had a pro exhibition race between the F1 esports drivers, so we’re using it as an opportunity to service traditional esports entertainment to a broader audience and see what the general reception will be to that. The learnings will continue to inform our wider strategy across all of the different products we have in esports.

Given the viewing figures, do you think non-endemic brands will be more encouraged to partner with Formula One esports?

From a brand perspective, if you take a helicopter view, economically there are a lot of challenges everyone is facing. Yes, the product itself does provide a lot of visibility. The general thesis of why we’re doing this is to put the fans first and try to service them as best as we can. We’re working with our existing sponsors across our global partners, as well as our esports sponsors, to better integrate and leverage this new product that we’ve put out to the market.

Looking at the wider industry, how big an opportunity is the current climate for esports?

For esports as an industry, given with how things are developing, there has been an uptake in terms of users and players. Generally, each game and associated esports, will develop differently. Considering where Formula One sits within the simulation racing genre, the development and the trajectory for us will probably look a little different from say Fortnite or League of Legends.

At this stage, gaming and esports are getting more and more attention because of the circumstances. For us, because we have this asset that we first developed two and a half years ago now, so still relatively new, we’re still able to use it effectively. More than anything, it can provide a touchpoint for our fans in this time. If we didn’t have this, we wouldn’t have the biggest presence out there at the moment, so that’s also a great opportunity.

Most sports broadcasters are turning to archive programming to fill the schedules, but do you think offering live action is vital at the moment?

It’s a good question. I can’t say for sure that it is but, based on the numbers we’ve seen from the first virtual Grand Prix, the uptake and the reception for that was phenomenal. So there is certainly an appetite from the general public for live sport.

What can traditional sports learn and apply from esports during this time?

At Formula One, we’re very lucky to have our esports counterpart intersect with our real-life product so seamlessly. That is a huge advantage for us because we’re able to cross that real versus gaming chasm. Because our esports product is so aligned with the real-life product, we can provide an authentic, familiar form of entertainment for a wider audience.

Everyone is navigating this space as best as they can and we’re certainly focussed on how we can make the most of what is a very difficult situation and take it from there. Once this has passed, we will come out from the other side understanding a lot more about the potential we have within esports and how we can use it effectively beyond the Pro Series or any other forms we’re racing in right now.

What are the keys for implementing an effective esports strategy?

My background before joining Formula One was working as a digital strategy consultant. So, coming into this role, I look at esports no differently in terms of growing any other digital product, whether it’s an app, website or OTT service. The same questions still apply. You need to know who your key audience and customers are, what it is that they want, and what your core competitive advantage is.

The key to success is the test and learn approach, which is also really important more generally for companies navigating wider digital transformation.