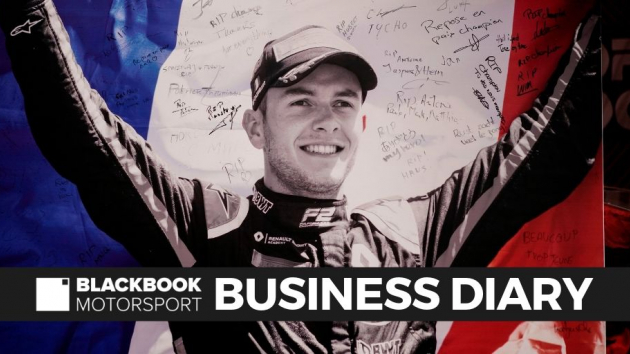 Ferrari’s Charles Leclerc admitted that his first win in Formula One was emotionally overshadowed by the death of French racer Anthoine Hubert in a crash at the Spa-Francorchamps track the day before the Belgian Grand Prix.

Hubert, 22, lost his life after sustaining injuries in a high-speed accident during the Formula Two race as part of the weekend’s events at Spa. Another driver, the American Juan-Manuel Correa, was flown by helicopter to CHU Liege hospital 40 miles north-west of Spa, where he is in a stable condition having broken both legs and suffered blood haemorrhaging at the scene.

The death of Hubert, the first at an FIA-sanctioned Formula One support race since Ayrton Senna and Roland Ratzenberger on the same race weekend at Imola 25 years ago, cast a dark cloud across Formula One’s main event the following day. A minute´s silence in memory of Hubert was held on the grid before the race and a sombre mood hung over the paddock.

Leclerc, who raced with Hubert early in his career, won from pole by seeing off a spirited late effort from drivers’ championship leader Lewis Hamilton before dedicating his victory to Hubert.

"My first ever race I did it with Anthoine, Esteban (Ocon), Pierre (Gasly)," said the Ferrari driver.

"I can't fully enjoy my first victory, but it will definitely be a memory I will keep forever."

Shake-up at the top of Liberty Media

Formula One senior executives Chase Carey and Ross Brawn have committed to staying in their roles to complete the series’ commercial and sporting overhaul.

The global motorsport series is in the middle of discussions over wide-ranging rule changes from 2021 that could change the make-up of Formula One.

According to the BBC, chief executive Carey and motorsports managing director Brawn will stay on to oversee the changes through implementation and after, but current commercial managing director Sean Bratches is being tipped to leave at the end of this year.

According to the report, Formula One’s commercial structure will be revamped over the winter and Bratches will not stay in his post.

William Storey has resumed control of energy drink brand and Haas title sponsor Rich Energy just weeks after being removed from that position in light of legal problems.

According to filings at Companies House, Storey has resumed his majority shareholding position at his company after relinquishing control to a third party.

With multiple court cases taken against Rich Energy earlier this summer in light of copyright breaches, as well as a separate matter concerning transfer of shares to wine company Vin-X, Rich Energy was renamed Lightning Volt with ownership relinquished by Storey to the BDG Group in London, namely to director Matthew Bruce Kell. Storey was also cited as being behind tweets which claimed the brand had relinquished its deal with Haas and criticised the team.

Haas team principal Gunther Steiner recently said the matter would be resolved before the Singapore Grand Prix, with the energy drink's branding remaining on the black and gold car at Spa.

Steiner said at Spa: "I don't want to go into details of the contract, but first they need to decide if they are going to continue to cooperate with us.

"I have nothing to do with that. I have enough to do."

Steiner added that the issue will not be resolved before the next race at Monza.

He said: "Monza is already next week, so there's not enough time to do everything that has to be done."

Williams Grand Prix Holdings, the owner of the British Formula One team, has been approached by several parties about a deal involving Williams Advanced Engineering (WAE), according to Sky News.

The holding company of the eponymous Formula One team, which is listed on the Frankfurt Stock Exchange, is apparently open to the sale of a majority stake in WAE, although a third-party purchase of a large minority stake is reportedly more likely.

The company founded by Sir Frank Williams and Sir Patrick Head in 1977 still lists the former’s daughter Claire, the racing team’s deputy principal, as a big stakeholder. According to Sky News, the potential stake sale could raise ‘tens of millions of pounds’.

Vanessa Mas, promoter of the Belgian Grand Prix has admitted that the addition of a new race at Zandvoort in 2020 provides direct "competition" to her event in the Ardennes.

The 2020 Dutch Grand Prix will be the first in the Netherlands since 1985, with Max Verstappen, who Mas estimates counts 40 per cent of the Spa crowd as fans, set to be a significant pull.

She told the Dutch publication Formule 1: "It will have an effect. It is competition.

"But it is also positive for the sport, and therefore it's good for us too. We just have to work hard to keep the fans happy.

"We may get fewer Dutch, but there is also a gap between our races," Mas added.

On the provisional 2020 calendar, Zandvoort is in May while Spa keeps its traditional date at the end of the summer break.

Now Jenny Mikakos, the health minister for the state of Victoria, says law changes going before the local government’s houses of parliament will officially outlaw any words or designs associated with tobacco companies. A “rarely used” exemption for tobacco advertising at some events will also be repealed.

“Victoria has led the way in cracking down on deadly tobacco advertising and we want it to stay that way,” she said. “These important changes will stop tobacco giants from misleading Victorians and putting lives at risk.”

You question: 'Is it really worth it?’ Yeah, it's our job and it's our profession and it's our life, but also it's still just racing cars around in circles.

Congratulations @Charles_Leclerc on an amazing first win and a fitting tribute. Thank you. #BelgianGP https://t.co/sxgMPpbLrJ