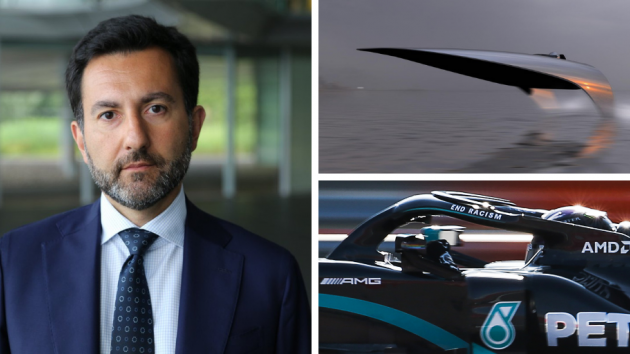 Lockdown saw many people find the time to discover a new hobby, attempt to learn a new language or finally pick up that bestseller that was sat unread on a bookshelf for months. Rodi Basso, on the other hand, had different ideas.

The former motorsport business director at McLaren had been busy with Alejandro Agag, the mastermind behind Formula E, and Union Internationale Motonautique (UIM) president, Raffaele Chiulli, cooking up the world’s first electric powerboat championship. Launched in September, it is here to usher in what Agag has hailed as a “unique step forward in marine-based sport”.

Unveiled amidst the glitz and glamour of the Monaco Yacht Club, the UIM E1 World Electric Powerboat Series will not officially cast off for its first season until 2022. But the launch sees the latest marrying of a new motorsport competition and sustainability – E1 says it is dedicated to ‘improving the health of the seas and the oceans’ without compromising on entertainment value.

Basso’s own career has encompassed considerable time in Formula One with the likes of Ferrari and Red Bull Racing, where he engineered cars for Rubens Barrichello and David Coulthard, among others. So, as E1’s new chief executive, what made him trade the track for the open water?

“The reason is very personal: I’m a passionate sailor,” he tells SportsPro. “At the same time, I'm an engineer and I'm massively passionate about technology within sport. I have studied and looked around and seen there are many lessons learnt that could speed up the journey of sustainable mobility on the waters.

“So, one is personal and the other is more professional, and they pushed me to think about a format and then to discuss it with Alejandro [Agag]. With his track record, he is the person to go to if you have a dream in this area and you want to realise it.”

Agag, as Basso alluded, is no stranger to electric racing, certainly on terra firma. Having established Formula E six years ago, which he claimed made its first profit in 2019, he turned his attention to off-road SUVs with the Extreme E championship, set to start in 2021.

Racing in remote countries across the globe, and featuring a team backed by six-time Formula One world champion Lewis Hamilton no less, Extreme E will run in direct association with E1 as the two fledging competitions bid to make their mark. With Senegal, Saudi Arabia, Nepal, Greenland and Brazil – areas already damaged by climate change – chosen for Extreme E’s inaugural campaign, E1 will also race in the bulk of these locations but has plans to branch out into other destinations.

“We are targeting five races in hosting cities,” explains Basso, who adds that Monaco has agreed to be the final race in 2022. “We will have other cities, I reckon, in the Mediterranean, very likely in Switzerland, maybe Geneva or Zurich, and we may target London as well.

“On top of this, we will have another five races associated with Extreme E. We see an incredible fit between the two ventures. Yes, one is on land and one is one water. But we reckon that by adding this adventure kick to the show, the entertainment will be only be beneficial to the UIM E1 World Electric Powerboat Series.”

SeaBird Technologies is designing the boats, which will hit speeds of 60 knots

Efforts to get the show on the road – or, rather, the water – are underway, with UK-based startup SeaBird Technologies creating the design for the futuristic-looking boats. Built to hit 60 knots (69 mph), the machines incorporate hydrofoil technology and will be driven by single pilots, who are expected to comprise a mix of powerboat specialists and road vehicle drivers.

“We call them pilots because the boat is almost flying,” Basso points out, clearly excited by the potential spectacle. “The next big milestone is to show a prototype boat in June [next year], possibly during World Oceans Day. From then, we will start an intensive session where we’ll address all the main points, beginning with safety.”

An official calendar and other core elements will follow suit, while Basso confirms discussions over commercial and broadcast rights partnerships are “open and ongoing”.

SailGP, the world’s fastest sail racing league, has also been brought on board to aid development, including event and logistics management. It is a move which Russell Coutts, the series’ chief executive, believes will “continue accelerating change toward a cleaner future”.

E1 will run alongside Extreme E, the new off-road SUV championship set to launch next year

Putting sustainability front and centre of its plans was always at the heart of E1 from the off. During its launch, Basso made no secret of his desire to use the new series to speed up the adoption of electric technology in the marine industry. With Formula E the only sport to have achieved a certified net-zero carbon footprint thus far, all while the planet teeters over the environmental precipice, tackling climate change in motor racing is more pressing than ever.

“I think we have no choice,” says Basso. “The future is electric. We are in front of a huge challenge, a race for surviving. I believe motor racing's approach and philosophy, and that sense of embracing challenge, can do something in order to address one of the biggest things in our lives today.

“It's not a choice, it's a responsibility."

The changing tide has finally been seen by a host of petrol-powered series, including Formula One. In 2018, the championship was responsible for 256,551 tonnes of carbon emissions – more than the annual energy use of 26,000 homes – the vast majority coming from logistics, personnel travel, and factories and facilities.

Outgoing Formula One chief executive Chase Carey responded by announcing plans to go carbon neutral by 2030, reeling off initiatives to eliminate the carbon footprint of the series’ cars and on-track activities. A shift to ‘ultra-efficient’ logistics and travel to go along with renewably powered offices, facilities and factories were also laid out.

Having worked in the sport extensively, Basso knows such sweeping changes will not come easily after 70 years of internal combustion.

We are in front of a huge challenge, a race for surviving. I believe motor racing's approach and philosophy can do something in order to address one of the biggest things in our lives today.

“Formula One has got a very difficult task,” he admits. “They need to engineer around an existing platform. In this moment with E1, as well as Formula E and Extreme E, we have the advantage of starting from a blank sheet. We can address this not only as a business strategy but its embedded in the brand, the vision, in everything that is decided around this venture.

“Of course, I'm not saying we're perfect because we won't be. But for sure we will try hard to get towards a sustainable solution without losing anything in terms close racing, excitement, fans, and everything that sport must bring.”

E1 may have the advantage of having electric in its DNA but it is racing into a world currently heading in a direction no one could have foreseen. While Covid-19 may have provided another obstacle alongside the myriad of other challenges that come with starting a new sports property, Basso remains unperturbed.

“Our hope is that the pandemic will not last any longer than March or April and have less aggressiveness,” he says. “We will start the championship in 2022 so until then we'll agree everything with the teams, the pilots and the cities. By the time we get there I hope that the Covid situation will have improved.”

To date, Formula E is the only sport to have achieved a certified net-zero carbon footprint

The sustainability drive is clear, but Basso finishes by insisting that it does not come at the cost of excitement – a message he hopes will resonate among the wider motorsport community. Going green doesn’t have to make things any less colourful, he says.

“We want to be 100 per cent entertainment. We have many strong messages but before that we need to have a strong marketing platform, an entertainment platform, so that you can attract fans and followers and then introduce those kind of topics. That, for us, is the key point.

“We will use state of the art technologies but we want to make sure that's not the protagonist of the narrative but the enabler of other messages. We don't want to scare the fans with things that nobody understands. We want to make it as immersive and as inclusive as possible.”