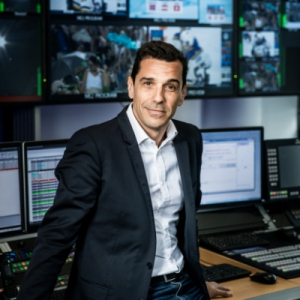 Laurent Prud’homme leads the rights acquisition and distribution for Discovery’s and Eurosport’s sports content around the world.
As Senior Vice President, Laurent recently assume responsibility for IOC and media services and was appointed CEO of Eurosport Events, as well as continuing to oversee its Rights Acquisition and Syndication groups, including the Olympics.

With Eurosport committed to broadcasting more premium, locally relevant and exclusive content, Laurent and his team have also secured rights to some of the best national competitions across a host of key markets such as the Bundesliga in Germany, Pro 2 rugby in France, the Swedish Allsvenskan football league as well as the Grundig Ligaen, Norway’s top-tier handball championship.

Prior to his current role, Laurent was Deputy Director of Acquisitions at French broadcaster TF1, directing its Rugby World Cup project and securing movies, series and documentaries.  He was previously Management Controller for the Sports and News Department at Canal+, the French pay-TV network.