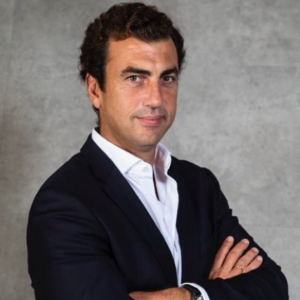 Born in Cordoba in 1974, Alberto Longo was raised in Sevilla where he went to school and studied law at university - with an ambition to join the family trade. After graduating, he joined banking group Santander and enjoyed an international career in Madrid, Geneva, Miami, Buenos Aires and Mexico City, connecting with the world’s most influential people.

In 2001, he returned back to Spain to join the law firm his father started, but before long his friend and cousin - Alejandro Agag - asked him to start a partnership to purchase Formula 1 TV rights in Spain. His mission was to commercialise those rights and make them attractive to an audience that at the time, was only 180,000 strong. “I was kicked out of every office I went into!” But as luck would have it, a certain Spaniard called Fernando Alonso entered the sport and during the time Longo was in charge, that audience grew to over 8 million.

A few years later, the pair purchased the Campos Racing GP2 Team, revamping it into the highly-successful Barwa Addax Team where Longo was appointed as Team Principal. Again, it was Longo’s connections and relationship with partners that made the difference as the sponsorship the team had acquired pushed them to win the teams’ title on two separate occasions and finish as runner-up three times.

“GP2 was relatively easy to manage,” so both Longo and Agag were ready for a new challenge, which would come in the form of the world’s first fully-electric single-seater racing series. Along with business partner Enrique Banuelos, together they planned to purchase and provide 40 newly-designed and built cars to help kick-start the championship. After winning the tender to promote the all-electric series - the FIA Formula E Championship was born.